The school is partnering with the U.S. Department of Energy, Sandia, Vestas and Group NIRE. 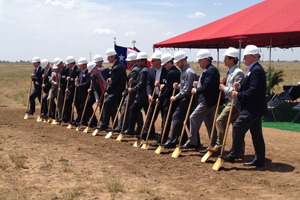 Officials from Texas Tech, the U.S. Department of Energy, Sandia, Vestas and Group NIRE take part in a ceremonial groundbreaking at the new SWIFT facility.

When operational later this fall, the facility, located at Reese Technology Center, will allow the partners to investigate turbine-to-turbine interactions and innovative rotor technologies. Other areas for research include aero-acoustics and structural health monitoring of turbines using embedded sensor systems.

The site will initially include two V27 research turbines deployed by Sandia and a third V27 turbine belonging to Vestas, a leading wind turbine manufacturer.

“The V27 turbines are the smallest turbines that retain significant characteristics to the study of larger-scale machines,” said Sandia project lead Jon White. “Having smaller turbines makes them easier to reconfigure, repair and maintain. The cost differences mean researchers can do earlier-stage, higher-risk research at SWIFT and turn tests around much more quickly, allowing them to pursue a more robust annual research agenda.”

“Exploring and understanding the full capability of wind turbines is critical to the future of wind energy,” said Kent Hance, chancellor of the Texas Tech University System. “Thanks to this great partnership, the SWIFT facility at Texas Tech will conduct vital research and help further the position of Texas Tech as a leader in the wind energy industry.”

The SWIFT facility could eventually expand to include seven or more wind turbines, which would allow researchers to further examine how individual turbines and entire wind farms can become better “citizens of the grid” and how to be more productive and collaborative.

“This partnership will allow us to look at long-term issues facing the wind energy industry,” said Taylor Eighmy, senior vice president for research at Texas Tech. “The research generated from the SWIFT facility will allow for optimization of turbine arrays. The expected improvements will continue to make wind energy more competitive in the market place. We are so fortunate to have the U.S. DOE, Sandia National Laboratories, Vestas and NIRE as collaborative partners in this venture.”

Sandia announced in July 2011 that it would move its wind energy test facility to Lubbock. In April, Vestas and Group NIRE, a renewable energy development company, signed a Memorandum of Understanding that allows use of the facility for collaborative and proprietary research, depending on the research need.

“This partnership will help quickly bring more technological improvements to market as we continue to drive down the cost of wind power,” said Anurag Gupta, director of rotor systems at Vestas Turbines R&D in Houston. “We will analyze turbine-to-turbine interaction and focus on refining the wind turbines’ rotor technology in a cost-effective way to further improve blade performance.”

The Department of Energy’s Wind and Water Power Program is funding Sandia’s work.

Vestas has research and development offices in Texas, Massachusetts and Colorado that work with the company’s technology centers in Asia and Europe to improve existing wind turbines and develop the wind power systems of the future. Since 1979, Vestas has supplied more than 46,000 wind turbines in 69 countries and employs more than 3,000 people in the United States in technology research, manufacturing, sales and service.