Group earns a pair of first-place finishes, while Raider Red was named the Most Collegiate Mascot. 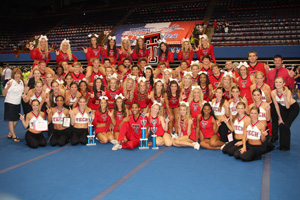 The cheerleading and pom squads pose with their trophies following another successful showing at camp. (Click photo to enlarge.)

“Camp is always an exciting time because it’s the squads’ first time to perform in public,” said Bruce Bills, Texas Tech cheer and mascot coach. “I am very pleased with both cheer squads and the mascot’s performances and camp results. They represented Texas Tech and the spirit program very well throughout camp.”

The spirit program was awarded the following: 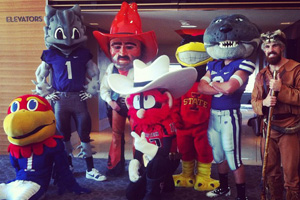 Raider Red poses at the camp with other mascots of the Big 12 Conference.

The following three members from the Pom Squad were selected for the All-American Dance Team: Kathleen Busch, Jackie Choi and Kortani Rettig.

“They were focused, determined and dedicated throughout their time at camp,” said Erin Harold, Texas Tech Pom Squad coach. “My team worked very hard, and truly deserved the awards they were given. Going to camp was a great way to start our season, and the Pom Squad definitely represented Texas Tech very well.”