Jason Young leads a group of seven alumni, who are competing for six different countries. 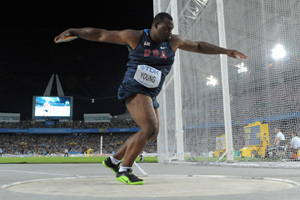 Jason Young understands the magnitude associated with competing for the United States in the 2012 London Olympics. That’s why he plans on attending today’s (July 27) opening ceremonies.

That’s also why, following Friday’s pomp and circumstance, the former Texas Tech track and field standout will focus solely on training and trying to capture a medal in the discus competition.

“The meet is an opportunity of a lifetime, too, so I’m going to make the most of it,” said Young, who graduated from Texas Tech in 2004 with a degree in exercise and sport science. “The worst thing you can do at a competition like this is to be unprepared. I’m staying in the Olympic Village with the other 20,000 athletes, but I’m going to spend most of my time traning.”

“I already know when all of them will compete, and you better bet I’ll be glued to the TV.”

For a schedule of events for the seven Texas Tech alumni, click here.

Young’s road to the Olympics has been the longest. He was a two-time All-American at Texas Tech and started competing professionally in 2004. But typical of professional discus throwers, Young didn’t start experiencing consistent success until about six years later. Unlike the more-popular sprint competitions, where most athletes are elite-level ready soon after college, discus throwers tend to peak in their late 20s to early 30s.

Last year, Young qualified for his first Team USA and finished 10th at the World Championship. This year, at age 31, he finished third at the USA trials to earn his first trip to the Olympics.

He was more relieved than excited about punching his ticket to London. 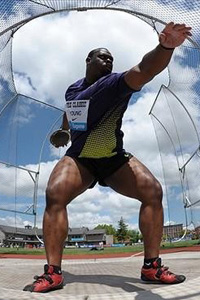 “I didn’t really go crazy, because my goal was to throw a lot farther than I did, so it was definitely not one of my best performances,” Young said. “I really felt like I could win the trials. It didn’t work out, but luckily I’ll have another shot at the Olympics.”

But Young still isn’t putting too much pressure on himself. His goal at the Olympics is to simply throw farther than his season best of 65.28 meters.

“If I can do that, I'll give myself a pretty good chance to end up on the medal stand,” he said. “Conditions and environment play a huge role in this sport, so I think the gold medal is up for grabs.”

No matter what happens in London, Kittley is impressed by Young’s resiliency. Not only do professional discus throwers need patience, their careers also aren't very financially rewarding. In fact, Young said he didn't have the opportunity to make money until his fifth or sixth year as a pro.

But he never gave up. He spent his entire career training in Lubbock, while at the same time working to support his family, which includes wife Megan and 1-year-old son Omoghan. He currently works as a personal trainer at Zach’s Club, and still can’t afford to hire a full-time coach. So, he coaches himself, using different discus rings throughout Lubbock, including the one on Texas Tech’s campus that is just east of the National Ranching Heritage Center.

“He’s a testimony of sticking with what you believe in,” Kittley said. “He’s 31, and he’s been throwing for over half his life. Now he's in the Olympics. I’m very proud of him.”

Surely, Young also feels at least a little pride in himself, but he’s not about to show it. Remember, he has a job to do in London, and after eight years of hard work he’s not about to take this once-in-a-lifetime opportunity lightly.