From the Cotton Fields to the Pulitzer Prize 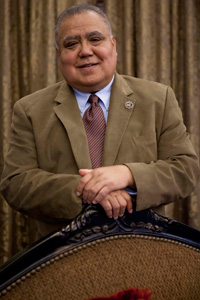 Montemayor never lost sight of the struggles and hardships his family endured, which instilled in him a belief that he could achieve well beyond expectations. .

His parents were migrant farm workers who followed the cotton harvest from the South Plains of Texas to the north. As a 5-year-old, he had no babysitter to watch him during the summer months since the entire family worked. Instead, he walked alongside his mother with a baby sack and picked cotton to help out in any way he could.

From the beginning, Montemayor disliked the aspect of manual labor, and although he didn’t shy away from hard work, he knew there was another life beyond the fields.

“I started to think to myself, there are possibilities out there past the horizon, other worlds,” he said.

In the 50 years after working in the fields, Montemayor became a Pulitzer Prize-winning journalist, successful business executive and college professor.

“I never actually planned it that way,” Montemayor said. “I had no clue as to where I would go.”

As a child in Tahoka, Montemayor momentarily escaped the scorching heat and field labor by getting lost in the books of Hemingway and other notable authors who wrote about their travels around the world. While reading countless novels, he said he would get transported into foreign lands and, if for only a second, escape and forget the grueling labors of the day.

“The more books I read, the more I wanted to explore a different world,” Montemayor said. “I became wrapped in my obsession of traveling to foreign lands and writing about my experiences.”

Although initially attracted to the University of Texas at Austin-- he wanted to play football under legendary head coach Darrell Royal-- destiny had different plans.

Montemayor entered the College of Mass Communications at Texas Tech as a journalism major in the fall of 1971. He worked at the University Daily, now the Daily Toreador, and not long after, became editor.

Chuck Lanehart, criminal defense attorney and long-time friend of Montemayor since their undergraduate years at Texas Tech, said he always knew Montemayor had a passion for journalism.

“He was determined to flush out the truth in every situation and was extremely competitive when it came to moving up the career ladder at the University Daily,” said Lanehart, who also worked for the school paper.

During the early 1970s, Lanehart said it was the heyday of Watergate, and print journalists like Robert Woodward and Carl Bernstein were like rock stars to them. Lanehart and Montemayor often referred to themselves as “muckrakers,” a reference to investigative reporting. 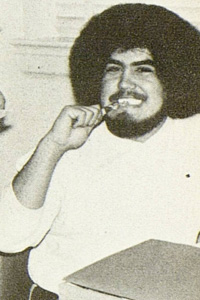 During his college years, Montemayor sported an Afro, which along with his writing, made him stand out on campus.

While working at the University Daily, Montemayor covered an array of topics, reporting on everything from a campus-wide streak to the campus administration.

“I think anyone who encountered Robert during his years at Tech thought fondly of him, or at least respected him, either because of his personal magnetism or because of his bold way of writing the truth,” Lanehart said. “Only a few thought he would get bigger than his Afro hairstyle at the time.”

Coming from humble roots instilled in him through his upbringing in a family of farm laborers just a generation out of Mexico, Lanehart said Montemayor never lost sight of the struggles and hardships his family endured, which instilled in him a belief that he could achieve well beyond expectations.

“At an early age, Robert became fluent in the Chicano community and blended with the Anglo majority at a time when most West Texans treated all people of color as second-class citizens or worse,” Lanehart said. “At Texas Tech, his combined talents of communication and leadership began to transcend racial and cultural barriers, and the rest, as they say, is history.”

It was during Montemayor’s undergraduate years at Texas Tech and the experience he received as a reporter and editor for the campus newspaper that helped solidify his dreams of becoming a journalist.

“If not for the fact that I had been trained fundamentally at Texas Tech, I probably wouldn’t have been as good as I was,” Montemayor said.

He told his professors that by the age of 30, he would win the Pulitzer Prize. It was his goal, and he never lost sight of it.

Telling the story of the Latino Community

The summer after his graduation in 1975, Montemayor worked as a contributor to the Dallas Times Herald, reporting and writing numerous stories focusing on the alleged civil rights violations of Mexican-Americans in Texas.

In 1978, Montemayor became one of the few Hispanics to join the predominantly white male news writing team at the Los Angeles Times.

“In their eyes, I was supposed to be the walking encyclopedia of Latino culture,” Montemayor said. “I wanted to be remembered as a damn good journalist, who happened to be Latino, not just a Latino journalist.”

Montemayor believed the Times did not cover the Latino community in a meaningful way. Instead the stories focused on the stereotypical depictions of Latinos: gangs, violence and undocumented immigrants.

East Los Angeles has one of the largest Hispanic populations in Los Angeles County. However, he said the Times refused to cover the area because it believed the Hispanic community never read its paper.

Upset by the lack of in-depth Latino coverage, Montemayor, along with other Latino reporters from the paper, took a stand and challenged the racism, discrimination and ignorance with a three-week series, “Southern California’s Latino Community.”

The series focused on the prevalent societal impact of Latinos in the U.S.: Politics, education, economic impact, cultural integration and immigration. It also attempted to portray the Latino community in a way that was never done before: telling the real story of a dynamic, increasingly integral group of people who often times is left in the shadow of the public eye. 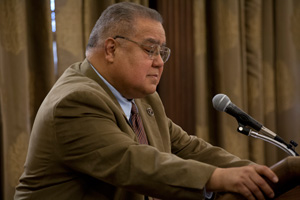 Montemayor won the Pulitzer Price in 1984 for Meritorious Public Service, one of the most prestigious awards for a publication.

“We felt too many times the press would depict us in a negative way, so as journalists, we thought we’d give it a different spin,” Montemayor said.

As a result of the series, the team won the 1984 Pulitzer Prize for Meritorious Public Service, one of the most prestigious awards for a publication. Montemayor is the first alumnus from the College of Mass Communications at Texas Tech to win a Pulitzer Prize.

The Business Side of Journalism

In his career, Montemayor said he always aspired to be a well-rounded individual who not only could write and be a successful reporter, but also lead and manage the business aspect of the media industry.

During the early stages of his career at the Times Herald, his editor asked him if he would ever consider pursuing a master’s degree in business administration.

Although initially hesitant, he said the idea planted a seed in his mind that remained throughout his journalism career. While working at the Times, he approached his editor about applying for an MBA program.

“You’re not ready yet,” his editor told him, “journalism is still the blood in your veins.”

It wasn’t until after he won the Pulitzer Prize that Montemayor believed he got journalism out of his system and decided to transition to the managerial component of the field.

In 1986, Montemayor graduated from the University of California at Los Angeles with an MBA in marketing. After that, he worked in virtually all aspects of the media field, including advertising, marketing, distribution and management in companies like Dow Jones Inc., McGraw-Hill Cos. and VNU Business Media.

As a business executive, he also had the opportunity to mentor various up-and-coming managers, who went on to become prominent CEOs and vice presidents of companies.

“I had the ability from a business perspective to train and nurture them and show them how to become good executives,” Montemayor said. “I took a great level of pleasure knowing that I had made a difference there.” 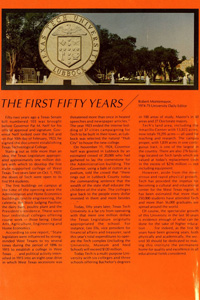 Montemayor was editor of the University Daily, now known as the Daily Toreador. (Click to enlarge)

Teaching the Next Generation of Journalists

Montemayor currently teaches journalism and media studies in the School of Communication and Information at Rutgers University in New Jersey.

Unlike many professors who depend greatly on books, Montemayor bases his lectures on career experiences to paint a full picture of the current state of journalism.

He teaches his journalism students about the importance of convergence in the changing field of communications. With the digitalization of the world, he said journalism is now a different world and playing field that demands a higher level of expertise and understanding from upcoming journalists.

“I can give students a strong blend of the two worlds to give them practical experiences to be good journalists,” Montemayor said.

Possibilities beyond the horizon

And in 2004, Montemayor was the primary author of the book, “Right Before Our Eyes: Latinos Past, Present and Future,” a 160-page accumulation of his research throughout the years.

He said there still are a few more books left in him, as well as a website he intends to launch at Rutgers and further Latino-related research. He said he can’t see himself retiring any time soon.

“For me, it has been a wonderful life,” said Montemayor, who earlier this year spoke at a distinguished lectureship series at Texas Tech. “I have had a nice mix of different careers that have all paid off and afforded me the opportunity to expand my vistas, understanding of different people and the world in general.”

Montemayor said he has no regrets and never looks at the past, but at the future to see what else life has in store for him.

Although his life has afforded him many opportunities, Montemayor never forgets about the little boy who worked long hours under the sun and, at moments, looked up beyond the fields and stared at the horizon envisioning a world full of possibilities.

“I’ve come a long way from working in the fields,” he said.