Kathy Pate Scott is the principal of the top high school in California, according to US News & World Report. 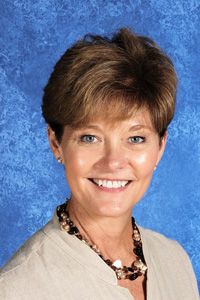 Scott has been principal of Oxford Academy since 2006 .

The No. 1 high school in California is managed by a Texas Tech alumna. And Oxford Academy in Orange County is the seventh-best in the country as well, according to a recent survey from US News & World Report.

Kathy Pate Scott, a 1979 Phi Kappa Phi graduate of Texas Tech’s College of Education, has been the principal of Oxford Academy in Cypress, Calif., since 2006. Since she has been leading the school, it has landed in US News & World Report’s top ten high schools in the nation and in California every year that the list has been published. However, this year, it was selected as the top high school in the entire state of California and as the No. 7 school in the country.

Oxford is a 7th -12th grade college preparatory public school of choice in the Anaheim Union High School District. It is designed for students who are high achievers and who are committed to attending a four-year university.

Scott believes she is fully responsible for the overall expectations that make her school a national leader.

“It is significant to note while we have students who have a strong desire to excel in their learning and parents who support that desire – that these two components alone will not produce a high-performing school,” Scott said. “There must be a school-wide expectation that all staff will give their best every day – food services, custodians, office staff, counselors, classroom teachers and administration.

“My job is to hold everyone accountable to this expectation and most importantly as the instructional leader, to ensure that teachers are equipped and supported to provide the best classroom instruction possible for students. We are very fortunate that the teachers at Oxford Academy are reflective practitioners, willing to continuously grow professionally and personally.”

Riding High as a Red Raider

Scott was born in Plainview and raised in Dumas until ninth grade when her family moved to Lubbock. She graduated from Monterey High School in 1974.

“My dad was a Tech graduate and the family expectation was for me and my two brothers, Bradley and Steven, to graduate from Texas Tech – which we all did,” Scott said. “In fact, all three of us were at Tech together from 1976 to 1979.”

She graduated with honors with a bachelor of science in education, with majors in secondary education, math and special education. Scott earned a Master of Science in Education Administration from the University of the Southwest, Hobbs, N.M., in 1997. 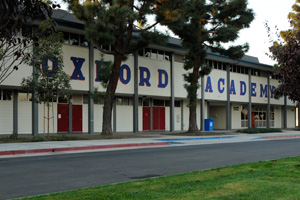 Oxford Academy has been one of the top 10 high schools in the nation every year that the list has been published.

While at Texas Tech, Scott worked for three summers in the registrar’s office and worked her freshmen year in the cataloging department in the library. She also was involved in the college ministry at Oakwood Baptist Church as well as with the Texas Tech Baptist Student Ministry.

Being in the right place at the right time was integral to Scott’s success in becoming a leader at Texas Tech. She was fortunate, she said, to be one of the three cofounders of Texas Tech’s High Riders, the women’s spirit organization that mirrors the iconic men’s group, the Saddle Tramps.

“In 1976, which was just four years after Title IX was enacted banning gender discrimination in public educational institutions, we founded High Riders,” Scott said. “The mission of this new spirit organization was to provide support for women’s athletics. The leadership role provided me the opportunity to step out into ‘unchartered waters’ for promoting women’s athletics and providing to young women a venue of service to the university in a new and important way.”

Two mentors who stand out to Scott are Jeannine McHaney and Joyce Arterburn.

“Miss McHaney was the Women’s Athletic Director at Texas Tech when we founded High Riders, and she was very supportive and provided a great deal of direction and focus to the new organization,” Scott said. “Joyce Arterburn was a professor of physical education and served as the first faculty advisor of High Riders and continued to be a very powerful force for the growth of the organization for more than 15 years. Both women were great role models for the establishing a discipline of tenacity and perseverance in the face of challenges and opposition that come with establishing a new campus organization.”

There are others Scott may not remember by name, but who made an impact on her future.

“I remember I also had a wonderful student-teaching advisor who provided me with support and encouragement during my last year at Tech. More specifically, he made a follow-up visit with me during my first year of teaching math at Thompson Junior High. The individual attention and concern taught me how important it is to provide that same kind of support to teachers, especially those who are beginning their educational career.”

Another timely event was the enacting of Public Law 94-142 in 1975, opening the door for special needs students to receive a free and appropriate public education. Scott remembers how visionary the chair of the Special Education Department was at that time. 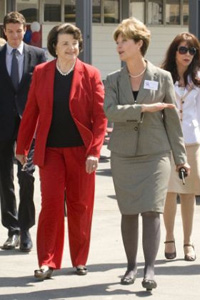 U.S. Sen. Dianne Feinstein accompanies Scott to watch some of the Oxford seniors present their culminating portfolios (May 30).

“Her forward thinking has remained with me to this day,” Scott said. “The special education courses I took introduced innovative, student-centered instructional strategies and impressed upon me the need to teach the student, not just the subject.”

The road to California

Scott’s education field-work requirement led her to teach residents of the Lubbock State School and juveniles who were incarcerated at the Lubbock County Jail. She said both experiences broadened her awareness of the power of education to all kinds of students and also taught her the importance of stepping into challenges that were beyond her initial comfort zone.

For two years Scott taught junior high math in Lubbock Independent School District, then for six more years in Deer Park ISD. Scott then taught self-contained elementary special education for eight years in Hobbs Municipal School District, and served as assistant principal at Lovington High School from 1997-1999. Now married and with two sons, the family moved to Santa Monica, Calif., in July 1999 where she taught math one year and then was assistant principal for three years and principal for two years at Lincoln Middle School in Santa Monica.

Scott agreed to serve as interim HR Director for one year with the Santa Monica-Malibu Unified School District, then moved to Anaheim Hills in Orange County and became principal of Oxford Academy in 2006.

“Thirty-plus years of educational experience have taught me the irreducible minimum that should be expected from every school, from every administrator, and from every teacher is a commitment to provide excellent classroom instruction. More specifically, this means a focus on relevancy, rigor and high student engagement.”

Kathy is married to Mark A. Scott, a graduate of Howard Payne University. They have two sons, Joel and Jeffrey. Joel graduated from Texas Tech in 2001 and resides in Houston with his wife, who is also a Texas Tech graduate, and their 18-month-old son. Jeffrey and his wife graduated from Howard Payne University and live in Abilene with their three-year-old and 22-month-old sons.