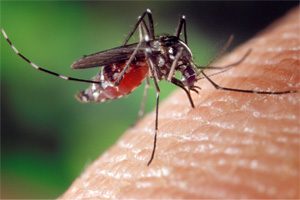 Dengue fever is a viral infection spread by several types of mosquitoes.

But after careful study of the disease’s characteristics, the mosquitoes that carry it and future climate change, two researchers at Texas Tech University said the impact on areas likely to experience dengue won’t necessarily play out along the lines of conventional wisdom.

Their findings were published July 5 in Environmental Research Letters.

Many studies have looked at how climate change might alter the geographic range of the mosquito-borne disease and assume the disease will occur wherever mosquitoes that carry it are found. This generally leads to predictions that the disease will move northward as the climate warms

However, Texas Tech researchers dug deeper to study climate constraints on the geographic range of the mosquito that carries dengue and the incubation characteristics of the disease within the mosquito. Factoring these into the equation, they found Southern outbreaks would decrease in size overall and become more common in the spring and fall while Northern areas could experience larger outbreaks throughout the summer.

“When we think about climate change, often the first image that comes to mind is the Arctic or a polar bear,” said Katharine Hayhoe, co-author and director of the Climate Science Center at Texas Tech. “But the real reason why we care about climate change is because it’s going to affect what matters to us in the places where we live. And what affects us more than our health? We did this study because climate change can interact with diseases and the vectors that carry these diseases.”

Dengue fever is a viral infection spread by several types of mosquitoes. The disease causes fever, headache and extreme muscle and joint pain, hence its other name – breakbone fever. A rash similar to measles also is common. Originally from Africa, the disease is found in 110 countries worldwide.

The disease occurs mainly in Mexico, Central and Northern South American countries today, though cases have been documented in far South Texas and Florida. Most people infected may feel nothing to cold-like symptoms. The acute form of the disease occurs in 20 percent of people infected. Survivability of the disease is good, with only 1 percent of those receiving treatment dying or 5 percent who are untreated.

As climate change occurs, the Asian tiger mosquito that occurs in areas from Lubbock to Atlanta and on up to Chicago likely will harbor the virus as temperature and rainfall changes make it more hospitable for the virus to survive further north, said Richard Erickson, a doctoral candidate in the Department of Environmental Toxicology at Texas Tech and lead author on the study.

He said researchers used four different climate change models and two different future energy use and population scenarios to project possible outcomes that cover the range of uncertainty in understanding how climate may change in response to human activities in the future. 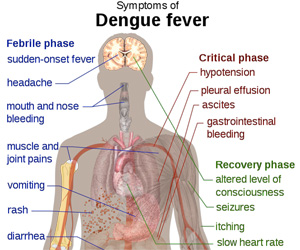 The disease causes fever, headache and extreme muscle and joint pain, hence its other name – breakbone fever. A rash similar to measles also is common.

“Dengue has been described as the most important vector-borne disease in the world because there are up to 100 million infections annually worldwide and up to 40 percent of the world’s population is threatened by the disease,” Erickson said. “Climate change is expected to increase the range of the disease and number of people at risk. Dengue is conventional, though, as a tropic/sub-tropical disease that occurs in the developing world, but in recent years there have been outbreaks in the developed world and locally acquired cases in non-tropical regions, such as France, Croatia and Texas.”

Erickson said most people have studied how climate change affects organisms by examining climate envelopes, which look at current habitats and match them with projected climate conditions. For example, people might expect plant and animal species to shift their range to the north as the earth warms.

However, Erickson and Hayhoe used a mechanistic population model for a mosquito species that did not necessarily assume a simple, broad shift in disease following mosquito populations.

“This approach allows us to better understand how climate change will affect the mosquito species and diseases transmitted by it,” he said. “Surprisingly, we found that dengue would shift, rather than increase the risk for dengue outbreaks within the southern United States. This occurred because projected climate conditions in the South became too warm and decreased the life expectancy of the Asian tiger mosquito. The shortened life span prevented the mosquito from incubating dengue before it died. Under the projected climate change, we found that dengue outbreaks in the South would be more likely to occur during the spring and fall. Additionally, we found that climate will likely increase northern range of dengue risk within the United States.”

Both researchers said that the study shows just one example of how the effects of climate change can often be nonlinear and counter-intuitive and recommended further study into animal and climate systems to understand how climate change will affect them.

The research project was funded by a grant from the U.S. Department of Defense.