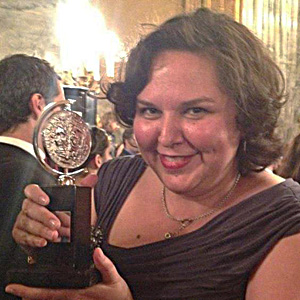 Lucio, posing with her Tony award, said her training at Texas Tech played an integral role in her career.

In the Beacon Theatre in New York City, Meredith Lucio sits alongside fellow producers of “The Gershwins’ Porgy and Bess” at the 2012 Tony Awards. They anticipate the news of winning an award.

But when the award presenters announced “The Gershwins’ Porgy and Bess” as winner for Best Musical Revival, Lucio became ecstatic.

“For girls like me who grew up thinking that winning a Tony Award was like being a rock star or going to the moon, I am so grateful, it’s just awesome,” said Lucio, a Wichita Falls native.

From an early age, Lucio has had a passion for the performing arts.

When she was 7 years old, she went to an amusement park and watched a Doo-wop show. During one of the songs, a dancer came up to her and put the microphone near her face for her to sing along.

It was at that sudden moment of hearing her voice on the microphone and seeing the bright lights of the stage that she discovered her passion for theater.

“I sang ‘ooh…ooh’ into the microphone, and it was at that moment that I realized, ‘Oh my God this is who I am,’” she said.

She enrolled at Texas Tech University’s College of Visual and Performing Arts where she took classes in theater.

Lucio said George Sorensen, a former Texas Tech professor of theater, played an integral part in developing her theatrical skills and encouraging her to take her work to the next level.

“He became my mentor for two years, and was instrumental in helping me formulate a philosophy of who I am in theater, and who I am in life,” she said.

Although she didn’t graduate from Texas Tech, she said she loved her years in Lubbock because of the sense of community and the formative theater training she received.

After graduation, she pursued a career in acting. Ever since she was a child, her dream was to move to New York City because of the vibrant energy and people from all over the world who are drawn to the city for the same purpose: to pursue their passion.

She said the early life of an actress is frustrating and difficult. In the world of theater, actors do not always have a choice in the type of work that they do or the role that they eventually play.

While in New York City, she took seminars offered by the Broadway League’s Commercial Theater Institute to help her learn from producers in the industry. 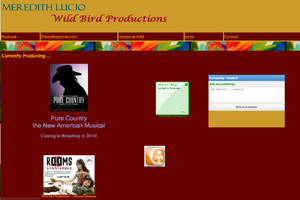 Since moving to New York City, Lucio has formed her own production company: Wild Bird Productions.

She was asked to help produce the Broadway play “The Gershwins’ Porgy and Bess." Although she wasn’t the lead producer, she played an important role by helping find investors to raise money for the production.

She said she is happy to be part of an industry-which she describes as a small, inclusive community-proud of the show that the production team created and grateful for the Tony award that the team won.

“The idea that I have a Tony award, I am still processing it,” she said.

In the near future, Lucio hopes to be a lead producer for a Broadway or off-Broadway show. She also hopes to be the winner of the most Tony awards in different categories: Best Director, Best Musical, Best Original Score, etc.

But for now, she said she’ll take it one step at a time.

“The next step is to find stories I am compelled to tell, figure out where they live in the marketplace, and make a commercial show,” Lucio said.

Her next project is a production play based on Ann Richards, the 45th governor of Texas, which will star Holland Taylor from the television show, “Two and a Half Men.”

Lucio is the founder of Wild Bird Productions and contributes to Theater Zen blog, where she discusses all things theater-related.

As she continues with her success in theater, she never forgets the words of her theater professor at Texas Tech to “keep fighting a good fight, no matter what.”

She said one of the biggest hurdles in life is saying yes and accepting failure. She said students in school should take the opportunity to pursue their passions and jump to do whatever it is in life that they are compelled to do.

“Take every moment to explore your creative self: who you are, who you want to be,” Lucio said. “In the end, you’re the captain of your own ship.”