Interested observers are invited to the Gott Skyview Observatory and Museum of Texas Tech. 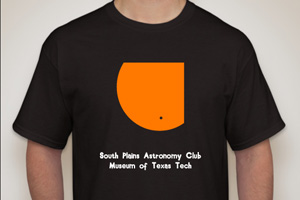 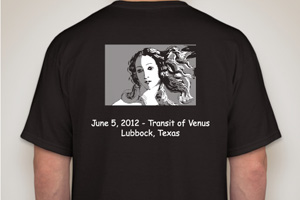 The South Plains Astronomy Club and Museum of Texas Tech created T-shirts for the rare event, and they will be available at the viewing for $10 each.

Making its second appearance in eight years, the planet Venus will come between the earth and the sun, gliding slowly across the disc of the sun’s surface – one of the rarest predictable events in the solar system.

Appearing as a small dot, the planet named for the Roman goddess of love should come into view for the South Plains at about 5:05 p.m. Tuesday (June 5). However, the whole dance will not be visible to the Central United States. The transit will be about 60 percent complete when the sun goes down at 8:55 p.m.

Haze from New Mexico’s fires shouldn’t be a problem, said Susan Holtz, a solar system astronomy instructor in the Department of Physics at Texas Tech University as well as an astronomer at the university’s Gott Skyview Observatory.  But if clouds appear, the Lubbock area may be out of luck to watch the last transit for another century.

“It’s the last chance in our lifetime to see a transit of Venus,” she said. “Venus’ transits come in a pair separated by about eight years. We had the first transit of a pair in 2004. The first of the next pair of transits is in 2117. That’s more than 105 years until the next time.  So, unless you’re a particularly healthy person, this is it.”

Since Jeremiah Horrocks and William Crabtree made the first scientific observations of the Venusian transit in 1639, people have watched this event only seven times, Holtz said. Mercury is a lot better on the transit score, making about 13 each century. But because Venus’ orbit is tilted with respect to the Earth’s orbit, Venus rarely lines up between the earth and the sun so that we can see the crossing.

Tuesday’s event will last about six and a half hours, though the South Plains only will see four hours before the sun sets.

“Historically, viewing these transits were important because it was one of the first ways to measure distances in our solar system,” Holtz said. “Before radar, this gave astronomers a way to determine distances between the Earth and the sun and the Earth and Venus.”

Collin Smith, an information technology unit manager in the Department of Mathematics and Statistics, said he traveled to Charleston, S.C.,  to watch the first transit in 2004. Last time, America caught the tail end of the transit on the East Coast and Europe was treated to the whole show. This time, Europe won’t see the whole event. Hawaii and Alaska will catch the show late Tuesday and China will see the entire spectacle in the morning of June 6.

“The transit is more subtle than an eclipse, so it won’t be quite as dramatic as that,” he said. “But it is an interesting site. This is a bit lazier, and takes six and a half hours compared to only minutes for an eclipse. Still, it’s a great scientific event. There will be lots of monitoring of the atmosphere of Venus. There are always plenty of scientific endeavors around a transit of Venus, because they’re so extremely rare.”

More information on the transit is available from transitofvenus.org, and Sky and Telescope magazine.  Watch a simulation of the event here. 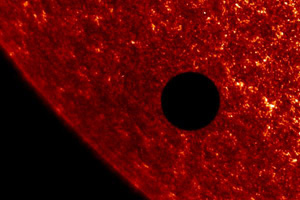 Tuesday's transit will last about six and a half hours, though the South Plains only will see four hours before the sun sets.

Holtz said people should remember never to look at the sun with the naked eye, Holtz said, even in the presence of cloud cover. Sunglasses or completely developed photographic negatives are not enough to protect against retinal burns. Telescopes and all optical devices must have solar filters, and people should use solar viewers that have been certified.

Smith said welder’s glass No. 14 is safe to view the sun through directly, too, but under no circumstances should people trust their vision to hodge-podge filtering schemes.

The public is welcome to attend a viewing at the Gott Skyview Observatory, Holtz said, though the parking lot is limited to 40 cars. Directions are here.

Smith said the South Plains Astronomy Club and the Museum of Texas Tech University will host a viewing party in front of the museum at Fourth Street and Indiana Avenue. Guests are welcome to arrive about 4:45 p.m. About 500 pairs of solar-filtered sunglasses designed specifically for direct solar viewing will be available for $1 apiece. Texas Tech’s Graduate School will provide graduate students with proper ID a pair for free.

Paper plates with centered, small circular holes will be provided for people to view the transit via projection onto a flat background surface.

Since the event will take about four hours, Smith said the team plans to wait out the clouds for glimpses of Venus. But should the weather not cooperate, club members will attempt to set up a live feed of the transit.

“This is a once in a lifetime event, so unless you're still breathing and seeing on planet Earth 105 and a half years hence in December of 2117, this is your last chance,” Smith said. “The South Plains Astronomy Club will have telescopes with properly fitted solar filters to observe this transit. The paper plates and views through the scopes are free, and the entire event is free and open to the public.”