This is the first time more than 11,000 students have been enrolled for a summer semester. 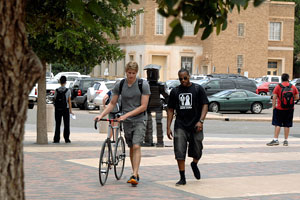 Texas Tech set a record for summer enrollment with 11,316 students enrolled as of the 15th day of classes.

Texas Tech set a record for summer enrollment with 11,316 students enrolled as of the 15th day of classes (June 25), the official reporting day. This is the first time more than 11,000 students have been enrolled for a summer semester.

“The growth of our university over the last several years is a testament to the faculty, staff and students in making Texas Tech a desired choice in higher education,” said Guy Bailey, Texas Tech president. “We continue to experience tremendous growth in our student population and are doing so by recruiting the highest quality student.”

The university is coming off of a record spring enrollment, which reflected more than 30,000 students in a spring semester for the first time. The fall 2011 count of 32,327 students is the highest single-semester enrollment total in school history. In the last decade, enrollment increased more than 25 percent.

“This record summer enrollment is vital in enhancing our influence and attaining adequate funding from the state,” said Chancellor Kent Hance of the Texas Tech University System. “Our continued enrollment growth over the last several years, specifically the consecutive enrollment records set in the last three fall semesters, last four spring semesters and last two first summer semesters, is the realization of the hard work put in by our entire team.”

The summer semester is the first of three-straight semesters in the legislative “base” period. Funding for higher education in fiscal years 2014 and 2015 are based on enrollments in 2012 summer and fall semesters and the 2013 spring semester.