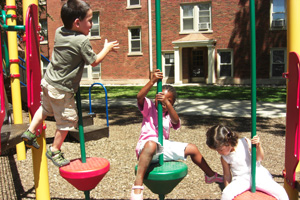 Children are encouraged to be more physically active during the summer.

With the start of summer, some school children find themselves with potentially dangerous conditions, such as “brain drain.”

More, however, will suffer in silence with a classic case of “couch potato.” Zhen Cong, an assistant professor of human development and family studies at Texas Tech University says this behavior, without intervention, can be habit forming.

“We found that family support is very important for reducing children’s sedentary behaviors,” Cong said. “Parents need to make this a priority and encourage their children to be more physically active.”

Her new study, published recently in the American Journal of Health Promotion, cites examples of sedentariness including watching television, playing video games and surfing the Internet. These behaviors are collectively known as screen time.

Researchers followed 418 parent-child pairings for two years, and found this sedentary effect especially prevalent in Hispanic families, whose children are more likely to be sedentary than non-Hispanics. The children, ranging in age from 5 to 9, also were especially vulnerable to obesity.

“This may be because the Hispanic culture typically has a higher fat intake,” Cong said. “Children also imitate what they see. If the parents are sedentary, their children will be too.”

The findings are the result of a 2007 study done in collaboration with several co-investigators at Texas Tech and Texas Tech University Health Sciences Center School of Nursing, called Transfomacion Para Salud (Change for Health). The research involved nutrition education, encouragement for exercise and family participation.

Parents were surveyed to determine how much support for active living they provided their children. Cong found that children with stronger parental support had lower levels of sedentary behavior.

“Support comes in the form of providing transportation to an activity, or maybe enlisting the child’s help with yard work,” Cong said.

The study also observed gender differences. Researchers found that girls had fewer sedentary behaviors to start out with, but boys were most likely to respond to their parents’ encouragement.

“The bottom line is that it is important to involve families in intervention programs to effectively reduce children’s sedentary behaviors,” Cong said. “This is especially true during summer break.”

Faculty Awarded for Encouragement of Women in Science