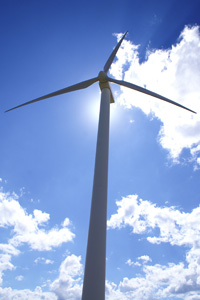 Texas Tech has been able to move forward with agreements with research turbine partners thanks to $8.4 million in funding from Gov. Rick Perry.

Officials announced June 5 that Samsung Wind Energy (SWE) and Group NIRE have signed an agreement to develop a wind power generation facility at Reese Technology Center. The agreement demonstrates the results of the investment of Texas Emerging Technology Funds (TETF) in Texas Tech and the National Institute of Renewable Energy (The Institute).

The new project will include two turbines, one a 2.3 megawatt and the other a 2.7 megawatt permanent magnet synchronous generator. SWE will use the facility to certify energy production capabilities for both models in the North American market.

“This is an important development for both Group NIRE and Samsung Heavy Industries,” said Jim Kantelis, chief executive officer of Group NIRE. “The project further solidifies us as a partner of choice for certifying new turbine technology.”

The Samsung-Group NIRE agreement, while it does not include Texas Tech at this point, will be located near the university’s Scaled Wind Farm Technology (SWIFT) facility, which is a partnership between Sandia National Laboratories and Texas Tech. Sandia will initially install two research turbines, with a potential for nine total in the next few years. The SWIFT facility is located on Texas Tech’s 67-acre Wind Science and Engineering Research facility at Reese Technology Center, which is located just south of the Samsung, Group NIRE site.

“Texas Tech welcomes the addition of another wind turbine manufacturer at Reese Technology Center,” said John Schroeder, director of Texas Tech’s Wind Science and Engineering Research Center. “It further establishes Reese as a magnet for wind energy research and development and as a draw for original equipment manufacturing companies.”

The National Wind Resource Center (NWRC), also established by Texas Tech in 2010, is a nonprofit organization that works through agreements with national laboratories and private industry, such as Sandia, to develop research projects. The consortium also includes partnerships with other academic institutions and trade organizations.

The Institute and NWRC consortiums were created with funding from the TETF. In July 2010, Gov. Rick Perry announced that Texas Tech and The Institute would receive $8.4 million from the fund.

“Funding from the TETF has been foundational in Texas Tech’s ability to move forward with agreements with partners such as Sandia,” said Taylor Eighmy, senior vice president for research at Texas Tech. “Texas Tech’s work to solve some of the challenges facing the wind power industry will allow our state’s economy to grow and our nation to move toward energy independence.”

“This announcement is great news for the state of Texas, as we continue to see the positive impact the Texas Emerging Technology Fund is having on our economy and the culture of innovation we have fostered across the state,” Gov. Rick Perry said. “Whether it’s finding cures for diseases or solutions to our nation’s energy needs, the Texas Emerging Technology fund is helping put cutting edge companies, Texas universities and researchers at the forefront of technology development in our nation.”

The Department of Energy has set a goal to produce 20 percent of the country’s electricity from wind energy by 2030. With agreements through NWRC, The Institute and Group NIRE, and foundational funding from the TETF, Texas Tech is positioning itself to become a premiere research and development center to help meet the nation’s energy challenges.