As the new series premieres, Jo Moore reflects on her time as a production assistant on the old show. 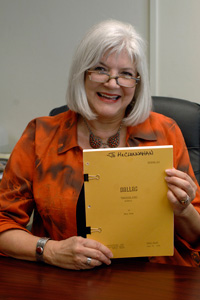 Moore, holding an original script from the show, first started working for "Dallas" in 1979.

On scorching summer days in 1980, the crowds swelled in downtown Dallas.

Word had gotten out.

Citizens clamored for a glimpse of the stars. Everyone watched in the hope of discovering clues, connecting some dots – anything – to find out the planet’s most important question at the time.

That’s when production assistant Jo Moore, then Jo McClennahan, realized that she stood in the middle of an international entertainment phenomenon. After an unknown assailant gunned down J.R. Ewing on “Dallas” in the March 21, 1980, episode titled “A House Divided,” it seemed the whole world held its collective breath to discover the name of the culprit.

Now, 34 years after the premier of the first five pilot episodes, Moore said she’s waiting to see old friends and the next generation on the premier of “Dallas” June 13 on TNT.

“It was such a fun time for me to work on the show and something I remember fondly,” said Moore, who is now the administrator for Texas Tech’s Presidential Lecture & Performance Series. “I grew up watching ‘I dream of Jeannie,’ so I was rather star struck upon meeting Larry Hagman. I didn’t know how big the show had become until I started reading about it in the press and seeing how people were reacting to it. The cast members were on the covers of every major magazine. I would glance at an article in the checkout line of the grocery store after work, then arrive for a 4 o’clock make-up call with Larry, Linda, Patrick and Victoria the next morning. You can’t help but take a step back and say ‘pinch me.’ I got a sense then of what a special experience it was.”

At the time, even she and the cast were unaware of how the plot would unfold. Dummy scenes had been shot. The plot thickened. That summer, the world could hardly wait for the fall premier. Hagman, who played J.R., was offered £100,000 to identify the perpetrator while vacationing in the U.K. Betting shops worldwide set up odds on 10 of the principal characters. And when the moment arrived, Turkey’s parliaments suspended one session to allow government officials a chance to go home and hear the perpetrator’s name.

Not only did the show make the actors international celebrities, but also it helped change people’s minds when they thought about Moore’s hometown. For years after the John F. Kennedy assassination, much of the country thought of Big D with disdain. With the show’s success, the city itself also became a star.

“Dallas had such a bad reputation from that,” she said. “Being from Dallas, you’d say where you were from, and people didn’t look at that very fondly. But this show helped to change people’s thoughts about the city.”

In her 20s, Moore said that she wanted to learn what went on behind the scenes of a production company. Videotape had become the new medium in the late ‘70s, and she found work at Southwest Teleproductions, a company that transferred film to the new medium of video. 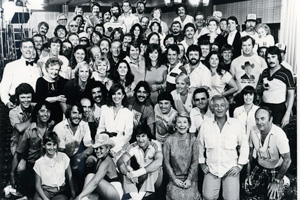 This is a shot of the cast and crew in 1980. Larry Hagman, who played J.R. Ewing on the show, is on the left side of the photo wearing a bow tie. Moore is two people to his right. (Click to enlarge.)

Beginning a 15-year freelance film/video production career, a stint on a low-budget movie in 1979 helped her quickly decide she wasn’t interested in the feature film industry. However, that same year colleagues in the industry told her of a position assisting the accountant in the production office for the then-new television show on CBS.

“Dallas” originally started as a five-part mini-series in 1978 that followed the “Romeo and Juliet” romance of characters Bobby Ewing and Pamela Barnes, played by Patrick Duffy and Victoria Principal. But when the show premiered as a full series in ’79, the focus shifted to surly big brother, J.R. Ewing, and America was hooked.

In 1980, Moore became a production assistant for the show, which shot the outside scenes at South Fork Ranch and downtown Dallas. Her days began with makeup calls at 4 a.m. Naming herself the “low man on the totem pole,” she often was the first person on the set and the last one to leave at night.

Twelve- to 14-hour days weren’t uncommon, she said, and keeping track of the multitudes of information that fell within her purview kept her on her toes. She monitored which actors would leave the hotel to come to the set, who was in makeup at what times, and when they were due on the set, as well as where Teamsters were supposed to park the trucks.

“Whatever the second assistant director told you to do, you did,” she said. “It was intense being a production assistant keeping track of so many details all the time.  But it was a great way to get introduced and see how shows were put together back then. There was nothing computerized. It was all hand-written on photocopies or typed out on forms. You become your own traveling city. It was a huge boost to the economy of Dallas. And your friends and the people you hang out with become the cast and crew.”

The Cast as People

All outdoor shots were filmed in Texas, Moore said. Interior shots were filmed at a sound studio in Culver City, Calif. On trips to visit the sound stage, Moore got to see actors working the inside scenes as well as the writers’ room in California, where producer and director Leonard Katzman and others pounded out script ideas and scenarios for the season. 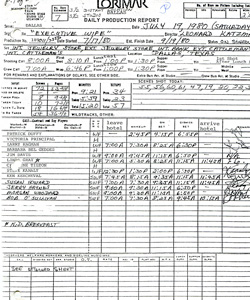 Among the memorabilia Moore still has from the show is this daily production report. (Click to enlarge.)

Compared to back home, the sound studios were much more comfortable.

At South Fork, temperatures could climb to 115 degrees during the day. Downtown scenes could be even hotter with the concrete and buildings, sometimes reaching 140 degrees.  Despite the miserable heat and humidity, the actors and actresses, sporting big Texas hair and shoulder pads, somehow managed to look like a million bucks on film.

As days turned into nights and the long hours passed, Moore said the cast and crew bonded like a family.

“Part of the experience when you’re working with these celebrities is you get to see them in a very different light,” she said. You see them as people, where the fans see them as stars. It really is a neat privilege to know celebrities as the people that they really are rather than as their celebrity image.”

Real sadness hit the company family with the passing in 1981 of Jim Davis, who played family patriarch, Jock Ewing. But mostly, Moore said she remembered many happy times in between all the hard work.

Hagman and Duffy lived to play practical jokes on set, she said. The two were constantly scheming and keeping the cast and crew in stitches.

“I remember Larry had quit smoking, and he carried this little fan with him,” Moore said. “If anyone around him would come up to him with a cigarette, this little fan would come out, and he would blow the smoke in your face. He was making a statement. It was the ’80s. Everyone smoked back then.”

Moore served as Barbara Bel Geddes'driver in the 1981 season.  Taking the woman who played “Miss Ellie” wherever she needed to go, Moore said she enjoyed the ribald company.

“She was just a lot of fun,” Moore said of Bel Geddes. “She was this salt-of-the-Earth, sweet character as Miss Ellie. But she was very funny in real life. And she had a very dry sense of humor. She was very irreverent.”

Even to this day, Moore said she made some lifelong friends – location casting director Rody Kent and Victoria Principal, who played Bobby Ewing’s wife, Pamela. 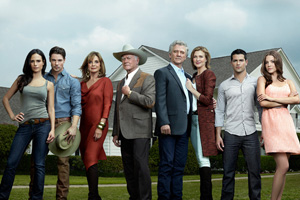 The new series includes some of the actors from the previous one, including Hagman and Duffy.

“Victoria and I became good friends and still are to this day,” she said. “I have family in California, so if our schedules mesh, we get to see each other. Regardless, we stay in close touch. I remember, though. We would go to lunch, and we could not go anywhere without people interrupting us or wanting an autograph.”

End of the Line

After her stint on the show, Moore said she moved on to do other production work with movies of the week, TV commercials and even a rock video for Aerosmith. She worked for several years in the audio-visual department at Mary Kay Cosmetics.

Moore said her experience working on "Dallas" prepared her for a career in the arts by providing a framework for interacting with creative individuals from actors to producers to crew.

Film and video production is a collaborative effort, and especially on the scale of a major studio production like “Dallas,” the ability to engage with folks of all walks of life is essential. One learns on their feet, she said.

There is no school for learning the ropes quite like working on a set, whether it is on location or in a studio, she said.

“The phrase ‘time is money’ has never been more apparent as in the film and video industry, so learning how all the moving parts work together was essential in learning how to budget later in my career when serving as a production manager/producer for TV commercials, sales/training films and now, in my position as administrator for the Presidential Lecture & Performance Series,” she said. “I also believe that learning early in my career how to communicate and work authentically with celebrities and studio executives has proved invaluable throughout my career. An interest in people, whether cast or crew, and a passion for connecting people and ideas has led me to this fascinating career as an arts presenter with the College of Visual and Performing Arts and the Presidential Lecture & Performance Series.”