Local chapter of CASA honored with the Promising Practices Award of Excellence. 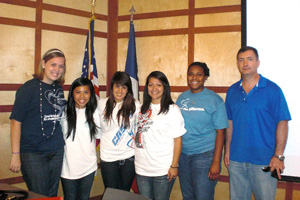 Sanchez, third from right, began organizing the group after seeing a posting on Facebook.

National Court Appointed Special Advocates (CASA) recently honored CASA of the South Plains with the Promising Practices Award of Excellence. The award honors the agency for the creation of Tech Students for CASA, a Texas Tech University student organization focused on assisting with CASA’s volunteer recruitment and fundraising initiatives.

In September 2010, Texas Tech students with the aid of CASA of the South Plains’ staff launched their own student organization to support the local CASA program. Levelland native Maria Luisa Sanchez, working on a bachelor’s in social work and a master’s in psychology, and past president of Tech Students for CASA, first became involved when she saw a note posted on Facebook asking for help organizing a student organization on campus.

“I didn’t have any personal experience with CASA before this,” Sanchez said, “but I knew what a great organization it was.”

Sanchez started recruiting at a campus outreach fair before the fall semester. “I was very surprised so many people already knew about CASA and were interested in becoming part of the group.” More than 60 students attended the first Tech Students for CASA meeting, surpassing everyone’s expectations.

The formation of a student group is a unique effort to reach the student population, and in its short history, the group is already having an impact. The students have been hard at work publicizing fundraising events for CASA of the South Plains and recruiting other students to become volunteers. They have also launched their own Facebook group.

Jennie Hill, executive director of CASA of the South Plains, is excited about the progress of the group.

“It is always great to get young and upcoming leaders involved in community service. Since we depend heavily on funds from individual sources, we welcome the students’ involvement and participation to assist CASA in our goal of placing a volunteer with each child in the foster care system on the South Plains,” Hill said.

When home is no longer safe for a child, and the child must enter the foster care system, a judge may appoint a committed volunteer called a CASA or Court Appointed Special Advocate®. The volunteer assists in navigating the way for abused and neglected children – out of the complex, overburdened child welfare system and into safe, permanent homes.