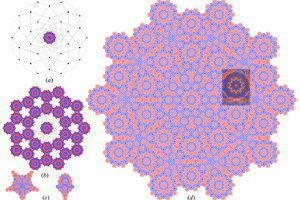 After analyzing the patterns, Ajlouni found the system many researchers had attempted to understand through complicated mathematics was quite simple to construct

After studying ancient Islamic architecture and its connection to quasicrystal patterns established in the 1980s, a Texas Tech professor found that eight centuries before its description in the west, ancient designers had unlocked the mysteries of the complicated long-range order of quasi-crystalline formations, which modern science is still struggling to resolve.

Rima Ajlouni found that ancient Islamic patterns, developed with a compass and a straight edge, can explain complicated global systems, which scholars have been working to unlock for three decades. She received the Architectural Research Center Consortium New Researcher Award for her multidisciplinary breakthrough.

“In terms of normal periodic symmetry, it is easy to predict the entire global system based on a small portion,” Ajlouni said. “Because of the idea that inside a crystal atoms have to be ordered in repeating patterns, for example, square patterns have to be periodically repeated so the atom will be exactly the same distances in every order.”

Five-fold pentagons don’t work the same way. The spacing between some atoms is different than between others. Placing pentagons edge to edge will always render gaps, which should not be there.

In 2007, Ajlouni had a revelation inspired by a paper published by Harvard and Princeton University researchers. Investigators had noticed ancient Islamic architecture has a local tiling system similar to quasicrsytals, but it did not repeat periodically.

“That’s what triggered my interest in quasicrystals,” Ajlouni said. “Now I’ve worked with ancient Islamic patterns since 1996, so I understand exactly how they work.  The minute that paper said it’s a local tiling system, I thought, there’s no way. There must be a global system.”

Ajlouni began analyzing all the patterns, and found the system many researchers had been attempting to understand through complicated mathematics was in fact quite simple to construct.

“That’s what my discovery is,” Ajlouni said. “I found the global system that was used to generate these patterns in ancient times and can be used to generate new types of quasi-crystalline symmetries including the famous Penrose patterns. This global system is based on the golden ratio It’s a multi-level hierarchy system that can easily build infinitive quasiperiodic models.”

“In 1982, science found an unexpected structure in a mix of aluminum and manganese alloys, based on a five-fold and 10-fold symmetry. Until then, this type of structure had never existed before” Ajlouni said. “At least, that’s what science thought, that this was against all laws of nature.”

With her findings published throughout numerous disciplines, Ajlouni said she is excited for the huge research field that has been opened up to her.

“The new researcher award is a national honor, and I felt encouraged that this is great research to be pioneering in. This is an interdisciplinary field, so it connect physics, math, history, religion, art, architecture, computer science and more. Hopefully this discovery will even help advances in other fields.”