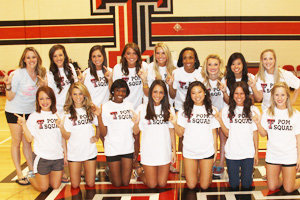 A total of 68 dancers completed the preliminary audition process, with 34 named as finalists for the 16 available slots.

Erin Harold, who came to Texas Tech in April as the new pom coach, posted all of the audition material to a private YouTube account and sent the links to the candidates one week prior to the preliminary auditions. The prelim round consisted of fight song/chant, audition routine and individual technique.

Finals consisted of across-the-floor combinations that were taught on the spot and then performed, individual interview, and then a call-back for some individuals at which they had to do the audition dance and fight song again.

“We were extremely overwhelmed with the talent at the pom squad audition this year,” Harold said. “It was very close for every spot on this year’s team, and we had to make some tough decisions. I am so excited about the squad that we have chosen, and look forward to working with them this season.”