The notification paves the way for additional research funding, which could range from $8-$10 million annually. 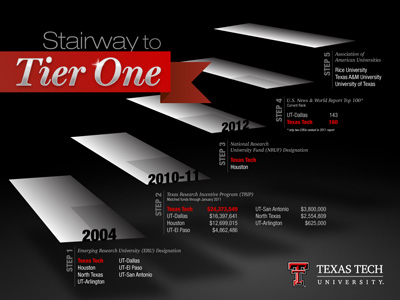 In March, President Bailey unveiled a 10-year business plan for the university with the end goal of inclusion in the Association of American Universities.

Texas Tech received official notice May 25 from the State Auditor’s Office that it has met the necessary criteria and is now eligible to receive a share of the state’s National Research University Fund (NRUF).

Inclusion to the fund moves the university a step closer toward its ultimate goal of becoming a nationally competitive research university. In March, Texas Tech President Guy Bailey unveiled a 10-year business plan for the university with the end goal of inclusion in the Association of American Universities (AAU).

“NRUF eligibility is a crucial part of tier one,” Bailey said. “It is a benchmark recognizing the progress toward excellence we have made in recent years. Our faculty, students and staff are to be commended for their efforts in our achieving this designation.”

The notification paves the way for additional research funding from NRUF, which could range from $8-10 million annually, effective in the upcoming fiscal year.

“I am pleased that Texas Tech is being recognized as a nationally competitive and elite academic institution,” said Sen. Robert Duncan (R-Lubbock), who authored and introduced the legislation. “Texas Tech’s administration, faculty and students have worked diligently to meet the high standards required to receive this designation. I am confident that Texas Tech will continue on this path of success to be among the nation’s top universities.”

Texas Tech is one of seven institutions initially designated by the state legislature in 2009 in an effort to boost the research capacity of the state’s public universities. To qualify for NRUF, universities must meet statutory criteria established by the Texas legislature. Of the seven, only Texas Tech and the University of Houston have met the criteria.

“We appreciate Sen. Duncan for his vision and determination to boost the state of Texas as one of the leaders in higher education research in the country,” said Texas Tech System Chancellor Kent Hance. “We also want to thank Rep. Dan Branch, Sen. Judith Zaffirini and all the other members of the legislature that worked to make the legislation a reality. Through their efforts, Texas Tech University will continue its ascent as a leader in research.”