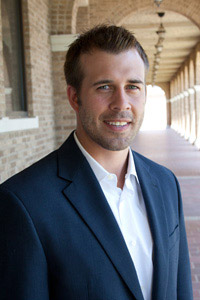 Disser also serves as the president of the Society of Petroleum Engineers (SPE), the college’s largest student organization.

Provided by members of the Whitacre College of Engineering Dean’s Council,  this award was established in memory of James A. McAuley, an active member of the Dean’s Council and a Texas Tech Distinguished Engineer.

Disser, originally from Montgomery, competed for this honor and was selected because of his outstanding academic achievements, honors, activities, interests and aspirations. He is a May 2012 petroleum engineering graduate with a 3.8 GPA.

Disser serves as the president of the Society of Petroleum Engineers (SPE), the college’s largest student organization. He has worked to increase the number of community service events that SPE participates in from four to six per semester and has implemented a mentoring program for underclassmen. He previously served as the external vice president of SPE and  also is a member of the American Association of Drilling Engineers and Ducks Unlimited.

In the summers of 2010 and 2011, Disser worked for Anadarko Petroleum Corp. as a production engineering intern in Vernal, Utah and a completions engineer in Denver.

Before coming to Texas Tech, Disser completed a bachelor of science in corporate communications at the University of Texas at Austin. After completing his degree, he worked at an oil and gas company in Conroe, where enjoyed the technical aspects of his job so much  he decided return to school to pursue a degree in petroleum engineering at Texas Tech.

Disser has accepted a job after graduation with Anadarko in The Woodlands, Texas. He will begin work as a drilling engineer at the Eagle Ford Shale play designing well plans and monitoring drilling activities.