Devi Khajishvili, from the Republic of Georgia, shares his story of determination and perseverance. 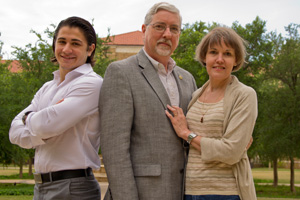 Webb, Downs and Khajishvili all said they felt an immediate connection to one another during their initial meeting in Eastern Europe.

It’s been two and a half years since Devi Khajishvili’s life took a turn that brought him from Batumi, a resort town in the Republic of Georgia, to Texas Tech.

Now, Khajishvili looks forward to completing his degree in political science and hopes to return to Georgia to help lead his home country, recently burdened by war, as a politician.

Born in the former Soviet Union, he witnessed the fall of communism and repercussions of Georgia’s 2004 Rose Revolution with Russia, including a new, more westernized culture.

“Life changed totally in Georgia in 2004, it was more modern, more westernized, the education system got better,” he said. “Instead of learning Russian as a foreign language, we started learning English.”

Khajishvili’s father, Nodari, who was once the Republic of Georgia’s deputy minister of sport in Adjara and world champion in Shotokan Karate-do, lost his job because of the war, and life changed.

While he still went to the private school he had previously, Khajishvili couldn’t afford college.

Since Khajishvili, who now speaks five languages fluently, had begun learning English in 2004, he was the perfect host for Texas Tech professors who were travelling in Eastern Europe. So in the summer of 2009, husband and wife Mark Webb and Virginia Downs, who also are Texas Tech faculty and staff, found themselves at Khajishvili’s breakfast table.

“We were only there overnight and the next morning until noon,” Webb said. “So they put on breakfast— and it was a monster breakfast—and Devi was the only one in the house that spoke English, so he did all the translating the whole morning long.”

Khajishvili said he just wanted to get to know the American couple, and they wanted to learn about his culture. They talked for four hours straight, with plenty of food.

“We had a lot on the table,” he said. “In Georgia that shows how giving you are, how welcoming you are. I had never seen real Americans before. I used to watch movies about American culture, which really interested me, but I never got to really feel it until I met Dr. Mark and Virginia.” 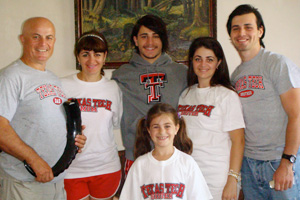 Khajshvili said he is enjoying Texas Tech, but is missing his parents and siblings in the Republic of Georgia.

Webb, Downs and Khajishvili all said they felt an immediate connection.

Webb said the group learned Khajishvili had been working to help support his family due to the hard economic times the war had created.

“He impressed us with his abilities and also with his diligence,” Webb said. “He told us he was graduating high school, and since things were not so great with Russia and higher education was very expensive, he would be forced to go into the army.”

The couple and a former Texas Tech law professor, Ann Graham, were moved by his story. A few weeks later, Khajishvili received a phone call confirming the instant friendship he described.

Downs, Graham and Webb called him and offered to bring him to Lubbock, pay for his schooling and give him somewhere to live.

“They host me here and give me education in every way,” Khajishvili said. “Not only did they give me a college education, but they got me driving lessons, they took me to guitar lessons, they paid for everything and they’ve taken care of me and given me proper education.”

While Webb and Downs have been on many of these Eurasian trips and met a lot of talented students, the couple had never been moved to do something like this before.

“People think my wife and I are crazy for doing this, but we’re not unusual people in any way,” Webb said.

While Khajishvili chose political science because the material will aid his goal of restoring friendly relations with Russia, he is also very sports-oriented like his father. A two-time world champion for his age range, Khajishvili also excelled in karate. He previously taught cardio boxing at the Texas Tech recreation center and now works as a personal trainer.

“While being here, I’ve met many interesting people,” he said. “Classes offered here at Tech are fascinating and help widen my thinking. For example, when I took U.S. government, it helped me understand how everything works in the U.S. and ways I can take all the good things about this system back to Georgia.”

He also enjoyed public speaking and said it was a tool he will certainly need as a politician. However, his favorite classes are transnational issues with and international politics with professors John Barkdull and Lance Hunter, in which he is currently enrolled. 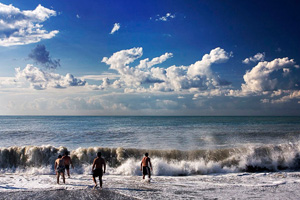 Khajshvili said his home Batumi, a resort town in the Republic of Georgia, is different than West Texas because of the beaches bordering the Black Sea.

Generally, people expect transitioning from one culture and one family to another might have its difficulties, but Khajishvili and his host family say there were very few.

“I’m lucky there was no difference,” Khajishvili said. “They are the same way as my real parents. Love for a child in Georgia and America is the same. My family has the same love for me and love for me to them that’s the same with the people I live with here. The differences are mainly in the cuisine and traditions. There are the same values, education is the priority, health is the priority, care for a child, being considerate, support, gratitude, all of this is the same. The mutual love that I have with my family is the same with Dr. Mark and Virginia.”

Khajshvili said that funniest part about living in West Texas, aside from the accent, is that so many people don’t know the Republic of Georgia is a country.

Khajishvili describes Georgian cuisine as 180 degrees different from American foods, and said his hometown is well known for its khachapuri, a filled bread dish with hot melted cheese, eggs and other ingredients; khinkali, a Georgian dumpling; and mtsuadi, which is skewered meat. While he was used to these complicated dishes, peanut butter is the American food he was most taken by.

“I had never had peanut butter in my life,” he said. “So that was an amazing discovery here. I ate it for lunch every day for a year.”

Webb said Khajishvili calls him “otec,” Russian for “father,” and that he and Khajishvili’s biological father are similar in many ways, describing their connection as brotherly. They often joke that 11 years from now, when Khajishvili’s youngest sister turns 18, they will bring her to the U.S. and do the same thing.

“I wish I would get to see her growing up in front of my eyes and teach her what I want to and what I have learned,”  Khajishvili said in reference to his 7-year-old sister Elene.“ What I lacked when I was 7 years old, I want to teach her English the way I learned it, to introduce her to various ways of life.”

While Downs and Webb say Khajishvili is intelligent, they believe what makes him stand out is his character and determination to make the most out of the opportunity to study in the U.S. and at Texas Tech.

“He’s the hardest-working, most diligent student I’ve ever met,” Webb said. “ He’s humble about his own abilities and accomplishments, of which he has many. His vision for his own country and the world and his determination, I’ve never met anyone like that, and my wife and I thought this is a way we can make a difference. We can make him able to meet his potential; then he’s going to go out and make a huge difference.”