Students Celebrate the Fourth Annual Save the Frogs Day 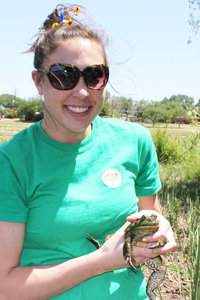 Nearly one-third of the world’s amphibian species are threatened with extinction.

On April 28, more than 35 volunteers organized by the Bernal Lab in Biological Sciences at Texas Tech cleaned three large playa lakes to help protect this critical environment for frogs and toads.

This effort was part of Texas Tech’s contribution to celebrate the Fourth Annual Save the Frogs Day, an event to raise awareness of the amphibian population worldwide decline.

Graduate student Lynne Beaty wanted this year’s event to directly help the animals around Lubbock.In the city, the playa lakes offer a critical resource where frogs and toads breed.

Unfortunately many playa lakes have substantial amounts of trash that can affect their ability to survive and breed. However, volunteers found a Texas toad and bullfrog even during the hours that frogs and toads are less likely to be active.

“Our efforts drew the attention of several park visitors, who greatly appreciated all we were doing to improve the quality of Lubbock playas,” Beaty said. “We ended up removing 58 30-gallon and 22 13-gallon bags of garbage from our target playas.”

Amphibian populations throughout the world have been declining at unprecedented rates, and nearly one-third of the world’s amphibian species are threatened with extinction. Up to 200 species have completely disappeared in recent years.

Amphibians are faced with an onslaught of environmental problems, including climate change, pollution, infectious diseases, habitat loss, invasive species and over-harvesting for the pet and food trades.

Save The Frogs Day events were held in at least 38 countries, including Canada, Colombia, Nepal, South Africa, Australia, and the United States with Lubbock being represented by Texas Tech University through this event organized by the Bernal lab in Biology.

Ximena Bernal, assistant professor of biology, said the event was a great success.

“We have helped improve the quality of the habitat for the frogs and toads in our area,” Bernal said. “I am proud of the strong support from volunteers and the students in my lab who contributed with this worthwhile effort.”

Last year, Texas Tech students, faculty and staff set a world record during the Arbor Day celebrations on April 29 for the most people in one place wearing frog masks, according to the World Records Academy.

About 700 people donned the froggy faces for the coinciding Save the Frogs Day, organized by the Bernal lab in the Department of Biological Sciences. The lab studies amphibian behavior to understand the factors that help some species flourish while others disappear.