A variety of shelters are now available, and they all seek one thing: Texas Tech's seal of approval. 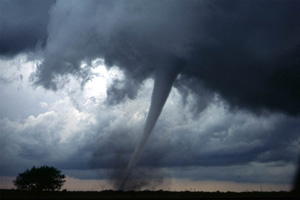 According to the National Oceanic and Atmospheric Administration there were 1,688 confirmed tornadoes in the U.S. in 2011.

A flower grows from a crack in the concrete slab where a home once stood in Joplin, Mo. One year ago, an EF-5 tornado chewed through the town killing 161 people. Today, there are many new homes under construction, peppered with makeshift memorials where families lost loved ones.

According to the National Oceanic and Atmospheric Administration, the Joplin tornado was one of among 1,688 confirmed that wrought havoc on the U.S. in 2011. It was the deadliest season since 1925.

Frightening statistics like these led Lubbock homeowners Eric and Melissa Pierce to reconsider their family’s safety.

“We moved from the country, where we had built a house with a safe room in our closet,” Melissa said. “We now live in town, in a home where a basement was not an option.”

But thanks to research conducted at Texas Tech for the past 42 years, the Pierces and many other families around the country have more options. When it comes to protection from tornadoes, Texas Tech remains at the center of debris impact testing and storm shelter development. And never has the sale of various storm shelters been more popular.

The Joplin Globe reports that more than a thousand safe rooms have been installed there since May 2011. There are now 15 businesses in the area working to keep up with demand. That is an increase from five companies two years ago. 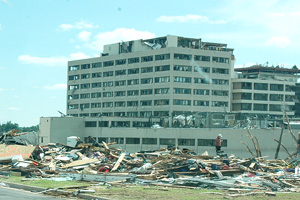 “Our business has quadrupled at least,” said Enos Davis, owner of Twister Safe, a safe room manufacturer located about twenty miles south of Joplin. “We went from a four-man shop to a 20-man shop.”

Davis first began marketing his product in 2005, but not before paying a mandatory visit to Texas Tech’s Wind Science and Engineering Research Center (WiSE).

The Federal Emergency Management Agency (FEMA) published P-320 in 1998 to help property owners decide how best to provide near absolute protection with regard to safe rooms. Virtually all the designs were developed at Texas Tech, with debris impact testing done at WiSE.

As long as a safe room is built according to the standards in P-320, a building inspector can approve it. If not, it must be debris impact tested.

“I called FEMA and they told me to take it to Texas Tech. So we put one of our shelters on a truck and drove it down there,” Davis said. “They shot off the wind cannon, and I just sat there and watched it. It was a great experience and a great facility.”

Tornado research touches down in 1970

Ernst Kiesling, a professor of civil engineering at Texas Tech, also is at the head of the National Storm Shelter Association (NSSA), which is the only organization of its kind dedicated to storm shelter quality. The non-profit is based in Lubbock – and not by coincidence.

“You might say Lubbock was the beginning of wind engineering,” Kiesling said.

He recalled a time more than 40 years ago, when Texas Tech had a group of young professors poised to do research, but “had virtually nothing going.” The situation changed on May 11, 1970, when one of the most violent tornadoes on record struck the downtown Lubbock. The F5 tornado killed 26 people and caused approximately half-billion dollars' damage. 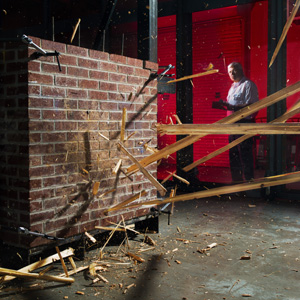 Texas Tech researchers use the wind cannon to determine how certain building materials withstand debris being lauched at various speeds.

At that time, Kiesling said there was almost no literature to assist a designer in building with more wind resistance.

“There were plenty of myths, like wells being sucked dry and chickens plucked clean,” Kiesling said.

He also recanted the notion that the southwest part of the house is safest, that it is best to open windows in a storm, and that tornadoes spun at the speed of sound (768 miles per hour).

“The research team went out and saw the devastation, and realized that we had a laboratory given to us here at Texas Tech, to study the effects of wind storms on buildings,” Kiesling said.

As part of their post-documentation studies, these eager researchers took hundreds of photos of the damaged buildings. They noticed stairways, closets and bathrooms were often still standing, while the rest of the structure was destroyed. They published the results, and from that grew the concept of above ground shelters.

“Obviously a central room offers safety to some degree, so why not look into additional reinforcement,” Kiesling said. “And then on the remainder of the house, we do what is sensible to reduce damage and economic loss.”

Their findings gained the attention of the National Science Foundation, who in turn gave Texas Tech additional funding to continue the research.

Today, we know that above ground shelters can be made from various materials, such as reinforced concrete, concrete masonry units, insulating concrete forms, timber shelters made of plywood and steel, and manufactured shelters made of anchored boxes of concrete or steel.

“Above ground shelters have been closely scrutinized and debris impact tested to be sure they have the structural integrity to withstand wind induced pressures, and the ability to resist perforation by windborne debris,” Kiesling said. 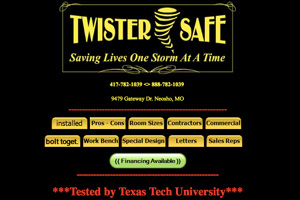 The Twister Safe company prominently displays on its website that its shelters have been tested by Texas Tech.

The concept of safe rooms attracted widespread media attention after NBC’s Dateline aired a documentary based on the destruction and death toll that followed the 1997 Jarrell, Texas tornado. It also featured debris impact testing at WiSE and shelter development.

Two years later, a shelter saved the lives of two women and their pets during the 1999 Oklahoma City tornado. This was a milestone because it provided convincing evidence that it is possible to protect people from tornadoes above ground.

Kiesling invited leading shelter manufacturers to Lubbock to discuss the situation, and the NSSA formed as a result. He was appointed executive director in 2001.

“We want to encourage the building of shelters, but we want to ensure they are of good quality,” Kiesling said. “We do not wish people to be lured into a false sense of security when lives are at stake.”

The International Code Council and NSSA signed the first agreement on storm shelter building standards at FEMA in Washington, D.C. in 2002. It consolidated existing references published by NSSA, FEMA, and the American Red Cross. The code would regulate the shelter’s design, construction and installation.

“Most of the designs are intended for buildings as new construction,” Kiesling said. “However it is possible to add a shelter to an existing structure.”

From garage floors to basements to closets, Kiesling stressed that human nature must be considered when making your selection. A well-placed safe room offers peace of mind knowing a place of safety is readily available. He said convenience also is key to a safe room’s success. 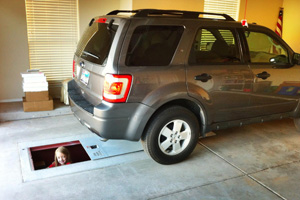 FlatSafe shelters are installed directly into a garage floor. The shelters themselves also are tested by Texas Tech.

“If you have to leave the house and cross the yard to get there, a person is less likely to go, or perhaps push it until it is too late,” Kiesling said. “An indoor shelter allows for a person to be nearby or to stand in the doorway and listen to weather reports until it is time to shut the door.”

For the Pierces, a FlatSafe shelter made the most sense. This safe room, which also is debris-impact tested by Texas Tech, was installed in their existing garage floor and seats six comfortably.

“We put it to use the other day,” Pierce said. “The one we got is for six people, but we called our neighbors over, so there were three adults, three teenagers, two kids and my fat cat. It was very crowded, but I was so glad we have it.”

“They’d never seen storms of this intensity before, therefore they were not prepared for it,” he said.

A year later, there are incentive grant programs in the works, with the eligiblility criteria still being worked out.

“We don’t try to outguess a tornado,” Kiesling said. “We just design for the worst case scenario.”

That intense dedication is why Davis credits Texas Tech with bringing stability to the safe room market.

“No one can go build a shelter and say it’s safe without meeting the FEMA requirements,” he said. “The testing Texas Tech does, helps make the buying process worry free.”