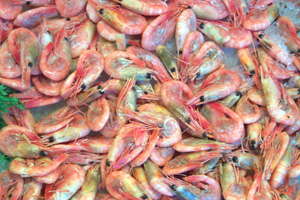 The shrimp used in the study were imported into the United States and purchased from grocery store shelves in New York, Washington, D.C., Atlanta and Los Angeles.

After testing farm-raised shrimp samples of international origin for ABC’s “World News with Diane Sawyer,” researchers at Texas Tech found evidence of antibiotics – one a suspected human carcinogen – in seafood imported into the United States and purchased from grocery store shelves.

Ron Kendall, director of The Institute of Environmental and Human Health (TIEHH) at Texas Tech, said researchers tested only the muscle tissues consumed by people. When concluded, they found that about 10 percent of the 30 samples tested contained evidence of three antibiotics.

Though the sample sizes were small, he said finding antibiotic residues at all is cause for concern. Todd Anderson, a professor of environmental toxicology, and instrument manager QingSong Cai conducted the shrimp analyses.

In the study, researchers discovered the antibiotic nitrofuranzone, a probable carcinogen, in two of the samples purchased in New York – one from a farm in India and the other from Thailand. Both samples were 28 and 29 times higher than the amount allowed by the U.S. Food and Drug Administration (FDA). The limit is 1 part per billion.

“Finding this particular antibiotic is of great interest, especially considering someone could have been eating an item that would have been banned,” Kendall said. “Nitrofuranzone is a genotoxic substance. It can affect the DNA of cells and result in genetic toxicity that can possibly result in cancer. You don’t want to ingest it. That’s why the FDA has adopted a zero tolerance stance with it.”

The antibiotic chloramphenicol showed up in one sample at 150 times the current FDA required detection limits on prohibited antimicrobial agents in seafood. Trace amounts of enrofloxacin showed up in a sample purchased from a store in Washington, D.C.

“With chloramphenicol, 45 parts per billion is considerably higher than the .3 parts per billion,” Kendall said. “It’s a very powerful, broad spectrum antibiotic. There is a reason why the U.S. FDA and other countries have set a very low tolerance for this product. You shouldn’t be consuming this.” 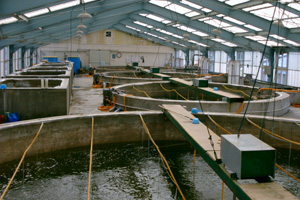 The U.S. General Accounting Office (GAO) has raised serious questions about the safety of imported seafood, half of which comes from fish farms like these that may require antibiotics to treat infections.

ABC contacted TIEHH to test the shrimp about a year after the U.S. General Accounting Office (GAO) raised serious questions about the safety of imported seafood. In their 51-page report, they cited that half of the seafood imported into the U.S. comes from fish farms, and that these animals, when grown in confined areas, may require antibiotics to treat infections.

The GAO questioned the FDA’s oversight program to check for unapproved drug residues in imported seafood samples and called it limited, especially when compared to programs in the European Union.

“These findings were pretty surprising to me,” Kendall said. “Considering someone may walk in to a grocery store to buy shrimp to eat, I think that’s worth further investigation, and more extensive testing should be done. This was a grab-bag sampling, and we reported what we saw. I don’t know yet if it’s a greater problem or a lesser problem, but it should be looked into at this point.”