Lubbock will be Final Stop for Rare Annular Eclipse

Texas Tech will host viewings for what should be a more-than-usually spectacular West Texas sunset. 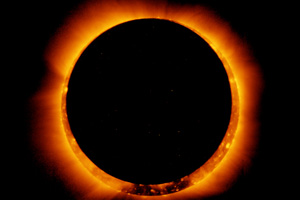 This particular annular eclipse will not occur again in this part of the country in three saros periods, which is about 54 years and 34 days.

What will start in Southern China will end about three and a half hours later in an even more-than-usually spectacular West Texas sunset in Lubbock.

That is, if the weather cooperates.

For the first time since 1994, the United States will be treated to a central annular eclipse of the sun, which will start at 7:31 p.m. Sunday (May 20) for the South Plains.

Susan Holtz is a solar system astronomy instructor in the Department of Physics at Texas Tech as well as an astronomer at the university’s Gott Skyview Observatory.  At the eclipse’s peak, which will occur about 8:36 p.m., she said the sun will appear like a giant ring of fire as the moon obscures about 94 percent of its surface. By 8:44 p.m., a crescent sun will fall behind the horizon.

“These annular solar eclipses are quite rare,” Holtz said. “Once the shadow of moon hits Earth, it moves across surface at more than 1,000 miles an hour. This will start in China and Japan, and then it will have a 3 ½ hour race across the Pacific Ocean. A larger region will see a partial eclipse. But it’s kind of special that Lubbock lands in the smaller region where we see the complete annular eclipse. It ends at Lubbock. That’s why we will see the eclipse at sunset.”

Observers are hoping for good weather, though a 20 percent chance of bad weather currently is predicted. The next partial eclipse in this region will occur Oct. 23, 2017. The next total solar eclipse for Lubbock will take place in 2024.

Though eclipses are cyclical and repeat in a time period called a saros, this particular eclipse will not occur again in this part of the country in three saros periods, which is about 54 years and 34 days.

More information on the eclipse is available from NASA and Eclipse-Chasers.

People should remember never to look at an annular eclipse with the naked eye, Holtz said, even in the presence of cloud cover. Sunglasses or completely developed photographic negatives are not enough to protect against retinal burns. Telescopes and all optical instruments must have solar filters, and people should use solar viewers that have been certified.

Collin Smith, an information technology unit manager in the Department of Mathematics and Statistics, said the South Plains is in for a special celestial sight. Also the treasurer for the South Plains Astronomy Club, he said that though solar eclipses occur regularly, they often are found in regions such as Alaska, Australia or Antarctica, or in the middle of the oceans where no one sees them. 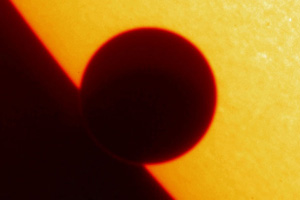 Venus traversing across the surface of the sun is an even rarer event, and won't occur again until 2117.

“It’s a truly going to be an amazing event,” Smith said. “The 48 states haven’t had a good eclipse for many, many years. This should be quite a treat. Lubbock is at the end of it, so this eclipse … it should be quite dramatic. The crescent sun setting will be spectacular.”

Smith said the South Plains Astronomy Club has teamed up with The Lubbock Lake Landmark for a viewing party with a much larger capacity. Running from 6:30 p.m. to 8:45 p.m., people should drive to the landmark site and park in Berl Huffman Sports Center parking lot. Attendees can take turns viewing the eclipse from about 10 different telescopes, or purchase available solar viewing sunglasses for $1 apiece.  Also, people can make their own paper-plate pinhole viewers for pennies.

Directions to the Landmark are here.

The public is welcome to attend a viewing at the Gott Skyview Observatory, Holtz said, though the parking lot is limited to 40 cars.  Directions are here.

But the fun won’t stop there, Smith said.

Hang on to the solar viewing sunglasses for another even rarer event. At 5:05 p.m. on June 5, the club will host a viewing event at The Museum of Texas Tech University at 4th and Indiana to watch Venus traverse across the surface of the sun.

“This is a very rare occurrence, and the next time this will happen will be 105 years from now in 2117,” Smith said. “I got to see the one in 2004, and it was quite spectacular. This happens twice in eight-year segments. So this is your only chance to see this event occur in your lifetime.”

For more news and events, go to www.spaceweather.com.