Gloriana Soto will be competing for a spot on the LPGA Tour on Golf Channel show. 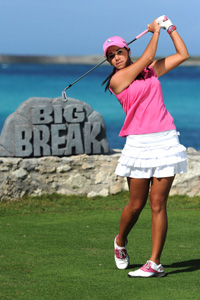 The first episode of “Big Break Atlantis” airs at 9 p.m., Monday (May 14) on the Golf Channel.

A big break may be coming for a former Texas Tech student athlete.

Gloriana Soto, a former member of the Texas Tech’s women’s golf team, will be competing on Golf Channel’s “Big Break Atlantis,” a competition at the Atlantis Paradise Island resort in the Bahamas. Twelve amateur golfers will be competing on the show for a spot to play on the LPGA Tour.

Soto is the first female professional golfer from Costa Rica to compete in the U.S. She was born into a golfing family and started learning from her father and grandfather at age 8.

“Being the first woman professional in Costa Rica for me has been very special,” Soto said. “I want to open doors for young aspiring golfers in Costa Rica. I want them to know that it is possible to follow their dreams with golf.”

Soto lives her life based on a philosophy of always going with her gut instinct. This philosophy led her to Texas Tech.

“I am a person that goes by feelings,” Soto told Golf Channel’s Jeremy Friedman. “How I feel. I always trust my gut instinct. Something inside told me Texas Tech was the place to go.”

Soto said she was scared about her decision but knew it was the right one. She learned a lot about herself in college including how to thrive under pressure.

“Playing golf at Texas Tech was very beneficial to my golf career,” she said. “When I was there we competed against some of the top universities in the country, which helped elevate my game to a new level.”

Soto received her bachelor’s degree in psychology and a minor in exercise sports science in 2009.

“Texas Tech is by far one of the best universities in the country, with some of the best facilities. As a professional golfer I can now say that I was blessed to play there.”

The first episode of “Big Break Atlantis” airs at 9 p.m., Monday (May 14) on the Golf Channel.

Students Celebrate the Fourth Annual Save the Frogs Day