Engineering Balance: A Day in the Life of Michelle Pantoya

Patience and perseverance drive her successful career as a professor, author, wife and mother of four. 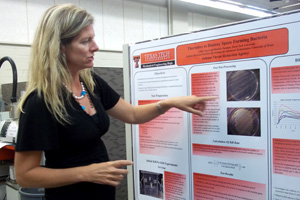 Pantoya came to Texas Tech in 2000 as an assistant professor of mechanical engineering, hoping to develop a successful program that would inspire students.

Michelle Pantoya hits the ground running as she and her husband, Damian, send off their boys to school. They include 9-year-old twins, Joseph and Aidan, 7-year-old Damie, and 5-year-old Mitch.

As in many large families, the youngest has figured out how to be heard.

“We get up at six in the morning, but my mom stays in bed until seven,” Mitch explained.

His amused mother questioned his analysis.

“So let me get this straight, I roll out of bed completely dressed and made up each morning?”

West Texas transplants from California, Michelle and Damian Pantoya met in high school and went to the prom together, but they attended different universities. Damian, a graduate of Sacramento State, is now director of finance at Lubbock Power & Light. Michelle has a bachelor’s degree in aeronautical engineering, and a master’s and doctorate in mechanical engineering, all from the University of California at Davis.

She came to Texas Tech in 2000 as an assistant professor of mechanical engineering, with a vision to develop a successful program that would inspire students. Her areas of teaching and research include wind tunnel modeling, heat transfer, fluid mechanics, thermodynamics and combustion. It is evident that Pantoya’s daily routine is a far cry from the stereotype of aprons and feather dusters. She is very much hands-on, both at home and in her lab.

“You follow your passion and do what you enjoy. And balancing family and career is the key to my happiness,” Pantoya said. “It’s a lot, but through patience and perseverance, you prevail. And in the end it’s very rewarding.”

A Passion for Teaching

On a particular Friday in May, Pantoya began her day preparing to meet with her graduate students one last time before the end of the semester. She is assisted by one of her students, Chelsea Weir, who gathers coffee and doughnuts.

“Chelsea will be graduating this month, and I’m really going to miss her,” Pantoya said, walking from the kitchenette to her office. “She’s moving to Houston to work for a group that has not seen fit to hire a new employee in 30 years. How exciting is that?” 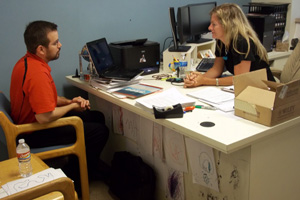 Pantoya's office desk is covered with artwork created by her four boys.

Pantoya gathered a few last-minute items from her office, where you can’t help but notice the influence of her boys. Her white desk has a splash of color, thanks to their artwork attached to all sides of it, also to her walls and the outside of her office door.

By 9:30 a.m., several members of Pantoya’s group have gathered in a conference room in Industrial Engineering. Following introductions, she began the meeting with light conversation and laughter, while discussing her students’ plans for the summer, both personally and professionally.

“My students are my inspiration,” Pantoya said. “They bring a contagious enthusiasm that leads to great ideas.”

Before shifting to student presentations, Pantoya decides to break for doughnuts. Only after her students have satisfied their hunger would she delve into serious conversation. As students presented their progress via slide presentations, she was an intent listener, soft-spoken and inquisitive. She offered solutions and constructive criticism, all of which seemed well-received by her students.

After the meeting, two of her students stayed behind for individual consultations. One took advantage of the brief walk back her office; the other required a more sit-down approach. And Pantoya was more than willing to take the time.

Next on her itinerary is a visit to the lab at 10:45 a.m., where her group studies energetic material combustion.

“Examples are explosives, pyrotechnics and propellants,” Pantoya said, demonstrating on a pocket hand warmer. “These are materials that do not require an additional oxidizer to react.”

“And the packet is reusable,” Pantoya said as she traded her floral skirt with heels, for a floral skirt with tennis shoes. “Just put it in hot water. Isn’t that neat?” Technology like the hand warmer delivers universal intrigue and appreciation for science, technology, engineering and mathematics (STEM). That is why Pantoya has expanded her reach well beyond the college years, all the way to elementary school. “Children are impressionable,” Pantoya said. “There is a need to plant the seed while they are young, watch it grow and allow it an opportunity to blossom into a stimulating and rewarding career.” 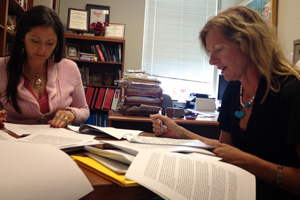 Pantoya is working with Texas Tech associate professor Zenaida Aguirre-Munoz to research the influence Pantoya's books have with children.

Children can identify with professions like doctor, teacher, police or fireman, she said. If you ask a child what an engineer does, however, they will say they drive a train.

As winner of multiple awards and honors, Pantoya can now add author to the list. Her first book with business partner and co-author Emily M. Hunt, “Engineering Elephants,” published in March 2010, has received rave reviews for the engaging humor and creative explanation of engineering concepts targeting children ages 4-8.

“It is my hope that through my series of children’s books, and age appropriate activities, more will consider engineering and STEM in their pursuit of a brighter future,” Pantoya said.

Texas Tech President Guy Bailey read their second book, “Pride by Design” to Lubbock school children for National Reading Day in January. This story features Raider Red as he takes in the sights and sounds of Raiderland.

“Engineering was our inspiration, and we put it with something they can understand, like sports,” Pantoya said. “We talk about specially engineered fabric that can wick away sweat and cool off cross-country runners, to the sweet spot on a tennis racket.”

A third book, “Designing Dandelions,” will be published in 2012, with plans for more, in collaboration with Zenaida Aguirre-Munoz, associate professor in the Bilingual Education and Diversity Studies program within the Curriculum and Instruction department of the College of Education.

When 11:15 a.m. arrived, Pantoya's lunch choice was more than a quarter mile away at Sam’s Place in Murray Hall. The clock was ticking, because she had an appointment with Aguirre-Munoz at noon.

“We’ll have about 10 minutes to eat,” she warned, as she placed a huge wrap on her tray. “I’m going to cut mine in half and bring it to Zenaida. She doesn’t know I’m doing it, but I know that she is often too busy to take time out for lunch.”

With lunch out of the way, the walking shoes were put to the test again, with the half-mile walk from Murray Hall to the Education Building.

Grateful for the half wrap, Aguirre-Munoz and Pantoya spoke for approximately 30 minutes, as Pantoya jotted notes in a pink legal pad. The future of Pantoya and Hunt’s book series was discussed, and also the prospect of adding a website and smart phone applications.

“The world is changing so fast with so many advances in technology, we’ll need to inspire the next generation of engineers to keep the momentum alive,” Pantoya said. 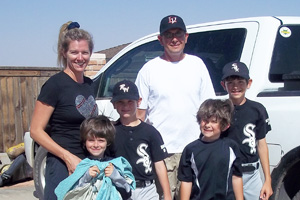 It’s all in a day’s work for Pantoya, but the real challenge is about to begin.

After finishing up on campus, she makes the drive to their home, south of town. There, the household comes alive at 4 p.m., as all four boys enjoy a late afternoon meal consisting of chicken nuggets, fruits and vegetables and chocolate milk.

Joseph and Aidan have a baseball game shortly, and are already suited up. Damie and Mitch will dress later for their practice and scrimmage at another field. Damie finished first and quietly slips away from the table, disappearing to his room. Meanwhile Mitch, a typical 5-year-old, chose to entertain, more so than eat.

As the twins finish their meals, they check on the family pets, which include two dogs, an aquarium of frogs and a young hamster – which lives in an elaborate enclosure complete with hamster playground.

The family patriarch arrived just as Damie called from his bedroom, hidden beneath a blanket. The boy is having trouble selecting something appropriate to wear.

“Michelle keeps it all together, she makes sure everyone is fed and gets them where they need to go,” Damian said. “The schedule is simple: baseball every night, for at least one of them. And they enjoy it. None of the boys is ever forced to do anything, except maybe Mitch.”

He left the entire family laughing as he went outside to greet a repairman who had just arrived to inspect damage after a recent hail storm.

With time running out, the boys were ushered outside, where bat bags and vehicles were waiting. Two climb in mom’s SUV, and the other two load up in dad’s pickup.

After a long day, this family of six is headed to separate ball fields, and the ruckus that preceded their departure is silenced by a shutting garage door. The only sound is that of a water bottle tumbling into the ditch - forgotten on the bumper of Damian’s truck.