Joseph Acaba currently is on a four-month tour of duty aboard the Russian Soyuz TMA-04M spacecraft. 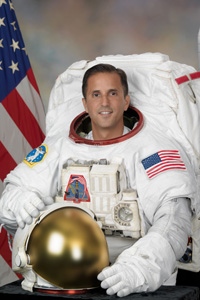 Acaba was selected as a mission specialist by NASA in 2004 and completed Astronaut Candidate Training in 2006.

The College of Education at Texas Tech announced a NASA astronaut has been accepted to its doctoral program in education.

Joseph Acaba launched May 14 for a four-month tour of duty aboard the Russian Soyuz TMA-04M spacecraft as part of the team for Mission 31/32 to the International Space Station. He also has been accepted to Texas Tech’s new Blended Delivery Ph.D. in Curriculum and Instruction with Specialization in Science Education for the cohort starting this fall.

Texas Tech Provost Bob Smith was delighted to learn that the College of Education has successfully recruited a second U.S. astronaut to be a Red Raider.

“When we hired our first Red Raider astronaut, Dean Al Sacco Jr., we underestimated the benefits his appointment would bring to Texas Tech,” Smith said. “We understand that Dean Sacco did play a role in recruiting astronaut Acaba to Texas Tech. Also, we know that both astronauts Acaba and Sacco have a passion for education of youth in science, engineering and technology. Our collective hope is that our Red Raider astronauts will be reaching greater numbers of young learners as astronaut Acaba joins us and progresses in his program.”

Acaba will take classes online in his own personal time after he returns from the mission, said Walter Smith, Helen DeVitt Jones Professor in the Department of Curriculum and Instruction and advisor for the doctoral program. The nature of the online classes allows for flexibility.

“Joe has outstanding experience as a science teacher and seasoned astronaut,” Walter Smith said. “He’s joining a cohort of exceptional educators who already possess exemplary science education credentials and will make a difference in the world as a result of their Texas Tech doctorate.” 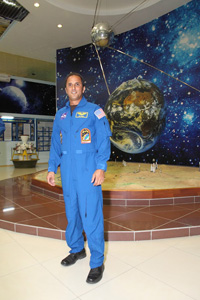 Acaba has a passion for education of youth in science, engineering and technology.

“In every aspect of his life, Joe has distinguished himself,” Munoz said. “I am not surprised that he has carefully selected Texas Tech to begin this new chapter of his life, at one of the country’s great public research universities. We are proud to welcome Joe to Texas Tech, and the Red Raider family.”