Even with two events left in the season, the Red Raiders qualify for nationals. 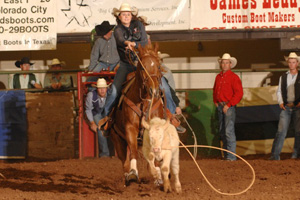 For the second year in a row, Kirsten Stubbs won the breakaway calf roping event at the Western Texas College rodeo.

After the March 23-24 win in Odessa, Texas Tech’s women’s team led all 16 schools in the Southwest Region of the National Intercollegiate Rodeo Association by more than 800 points.

The top two teams in each of the 11 regions and the top three individuals in each of nine standard events advance to the College National Finals Rodeo in June in Casper, Wyo.

The ladies’ rodeo team was led by women’s all-around cowgirl champion of the event Bailey Guthrie. The senior exercise and sport sciences major from Rigby, Idaho, won first in both go rounds and the aggregate or average in the goat tying event.  By placing third also in go round one of the breakaway calf roping, Guthrie has moved into the lead in the Southwest Region all-around standings and was crowned the champion all-around for the week’s competition in Snyder. Guthrie cannot be beaten for her second consecutive regional championship in the goat tying.

Kirsten Stubbs won her second-straight breakaway calf roping championship at Western Texas College. The junior agriculture and applied economics major from Eldorado came into the finals in ninth position but roped the fastest calf in 2.9 seconds, which not only gave her the first-place finish in the finals, but the overall championship for the week.

Cecily Crouch, a junior nursing student from Midland, placed second overall in the barrel racing event after winning second in go round one and placing third in the finals.

The week’s event was hosted by Western Texas College in Scurry County Coliseum. Taylor Langdon, junior radiology technology major from Aubrey has maintained her second place regional standing by placing third in go round one of the barrel racing. Also in the barrel racing, teammate Jessica Frost, senior animal and food sciences major from Santa Barbara, Calif., placed sixth in go round one. Frost placed second in the finals and ended up third overall, moving her into a tie for second place with Langdon in the regional standings (see www.collegerodeo.com).

On the men’s team, Texas Tech’s Josh Carden placed second in go round one of the steer wrestling event and finished sixth overall. The junior agriculture and applied economics major from Elberta, Ala., is seeking his first qualification to the College National Finals rodeo in June.

The teams have Easter weekend off, but will resume at Howard College April 15-17 and finish the regular season at Tarleton State University April 22-24.