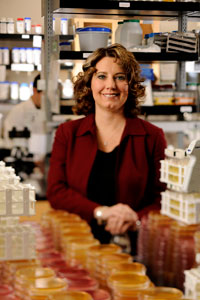 Because of the recent social media hysteria centered on “pink slime” and its subsequent removal almost entirely from the marketplace, beef prices will soar and feeding the world population economically will be much more difficult.

That is the prediction of Mindy Brashears, professor in food microbiology and food safety at Texas Tech, and director of its International Center for Food Industry Excellence, as well as a member of the Center for Biodefense, Law and Public Policy housed at the Texas Tech School of Law.

“Unfortunately, due to the spread of misinformation in the media with a particular negative push in the social media networks, this product has been removed from the marketplace,” Brashears said.

Brashears said LFTB is the product remaining on the carcass after the steaks and roasts are cut from the bones.

“Consider when you eat a steak at home and the fact that you cannot remove all of the meat that is close to the bone with a knife. The same thing happens in a processing plant.  The industry developed a system to recover this product. Because the product is made up of small pieces of meat, it is indeed finely textured and does not look ‘typical’ because the texture is different,” Brashears said. “However, it is 100 percent beef and it is safe.

“An ammonia process is used to treat the product which actually results in a safer product for the consumer. Unfortunately, the media painted the use of ammonia as the use of ‘household’ ammonia. This is simply not true. Many foods contain ammonia and the ammonia used in this product does not alter the nutritional value or make it unwholesome.”

Brashears said the decision to bash the beef industry based on misinformation will have several consequences.

“Sustainability and advancing agricultural technologies go hand in hand,” Brashears said. “Sustainability needs to be redefined into a term that indeed describes a system that will sustain our food needs in the human population and also, efficiently use our natural resources including the plants and animals that are on this plant. We have to be good stewards of our resources. Throwing away high-quality and safe beef is not being a good steward.”