The Santa Fe Opera Tour performance is at 7 p.m. April 29 in the Hemmle Recital Hall in the School of Music. 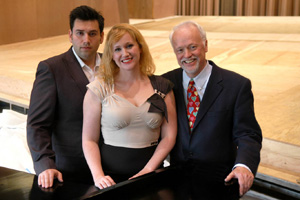 The Texas Tech Presidential Lecture & Performance Series concludes its season with the Santa Fe Opera Spring Tour at 7 p.m. April 29 in the Hemmle Recital Hall in the School of Music building of Texas Tech University.

“We’re here to be ambassadors of opera. Exposing people to opera is what the Santa Fe Opera’s Spring Opera Tour is all about,” said Kirt Pavitt, the music director and pianist.

The program for the evening is titled “Avastar.” The one-act original production, sung in English and written by Kathleen Clawson and Kirt Pavitt, is described as a dramatic journey incorporating musical works from opera, Broadway and the world of popular music that are familiar to all audiences. Music for “Avastar” includes music from composers and songwriters, G.F. Handel, Bob Dylan, Leonard Cohen, Giacomo Puccini, Van Morrison and others.

The Santa Fe Opera Spring Tour is composed of opera apprentice singers. The program has helped young singers establish their careers since Santa Fe Opera founder John Crosby created the program as part of the opera’s debut season in 1957. Touring dozens of cities throughout New Mexico and Texas, these talented singers perform a wide-ranging repertoire of arias, songs of the season, musical theater selections and sacred music.

Hemmle Recital Hall is located in the School of Music building on the campus of Texas Tech. Admission is free with limited seating. No ticket is required.