Hill Harper will keynote the event at 7 p.m. April 27 at the Lubbock Memorial Civic Center. 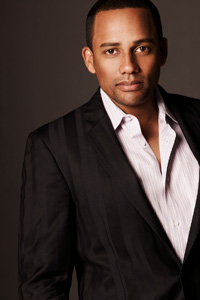 Harper's platform is built on enlightening youth, particularly African-American men, who are committed to achieving success.

Harper, who has a recurring role on the hit television show “CSI: New York,” is known for his roles in shows including “Soul Food,” “The Sopranos,” “ER,” “NYPD Blue,” and “The Fresh Prince of Bel-Air.”

To Harper, education is a stepping stone in achieving goals and opening doors of opportunity. As a voice of encouragement, his platform is built on enlightening youth, particularly African-American men, who are committed to achieving success.

Cory Powell, associate director for Mentor Tech, said each year Mentor Tech leaders bring in speakers who will inspire students to strive for their full potential. Past banquet speakers include Lauro Cavazos, former Texas Tech president; Christopher Gardner whose life was the basis for the hit film “The Pursuit of Happyness;” and Chef Jeff Henderson from the Food Network, amongst others.

Mentor Tech, which is part of the Division of Institutional Diversity, Equity, and Community Engagement, seeks to improve the retention and graduation rates of Texas Tech students, with a special focus on those from underrepresented groups. The program is named after Cavazos and Powell-Malone, the first African American to graduate from Texas Tech.

“With this being our tenth year, we wanted someone who has achieved academic success, name recognition and cross appeal,” Powell said. “We are excited to have Hill Harper coming, as he is not only an accomplished actor and author, but he is also devoted to service and mentoring.”

Mentor Tech began in 2002 with 46 students and more than 100 university faculty and staff mentors. The program has grown to more than 500 participants today.

Tickets for the banquet are $60 each or $75 for a pass to a VIP reception with Harper. Tables of eight costs $550 and $750, which also includes passes to the VIP reception. Proceeds benefit the Mentor Tech scholarship fund.