Clyde Martin also was recently named a Jefferson Science fellow and will work next year at the U.S. Department of State. 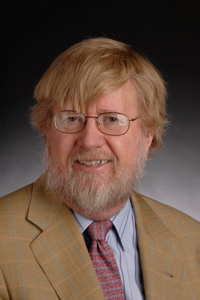 Martin’s research includes control theory, the development and analysis of mathematical models in agriculture, the environment and medicine, and much more.

A Texas Tech mathematics professor was named as fellow of the American Statistical Association (ASA).

Clyde Martin, a Horn Professor in the Department of Mathematics and Statistics, was chosen for his important publications and long-term contributions to the field of statistics. He is the third professor on faculty to be inducted into the group, and will be inducted formally during a July awards ceremony in San Diego.

“I am very proud of having been nominated and for receiving the award,” Martin said. “It is truly an honor.”

Martin was one of 48 inducted this year. The ASA’s extensive awards program recognizes statisticians who have made outstanding contributions through research, teaching, consulting and service to the association and statistical profession.

Martin’s research interests include control theory, the applications of algebraic and differential geometry to problems in numerical analysis, and the development and analysis of mathematical models in agriculture, the environment and medicine.

He led the group at Texas Tech that did the detailed analysis and modeling of the 1987 measles epidemic in Lubbock. This research revealed for the first time that greater than 98-percent immunity rate was required to prevent measles epidemics in dense populations such as universities. The State of Texas used the research in the decision to require multiple vaccinations for all school-aged children.

Among his more significant technical contributions include the development of models for the analysis of localized epidemics and endemic diseases. He has collaborated with engineers and scientists in a number of areas including aeronautics, bioengineering, chemistry, pediatrics, plant science, soil physics, epidemiology and chemical engineering on a variety of scientific topics. He has published more than 350 technical books and papers in a wide variety of areas.

Martin is a fellow of the Institute of Electrical and Electronic Engineers, a member of the International Statistics Institute and a recent recipient of a Jefferson Science fellowship to work next year at the U.S. Department of State. He earned a bachelor’s degree in mathematics education from Emporia State University, and his master’s and doctoral degrees from the University of Wyoming.

Other ASA fellows at Texas Tech include Jay Conover and Peter Westfall, both Horn Professors of Statistics in the Rawls College of Business.

The American Statistical Association is the world’s largest community of statisticians. It supports excellence in the development, application and dissemination of statistical science through meetings, publications, membership services, education, accreditation, and advocacy. Members serve in industry, government, and academia in more than 90 countries, advancing research and promoting sound statistical practice to inform public policy and improve human welfare.

Faculty Honored for Excellence in Teaching and Research