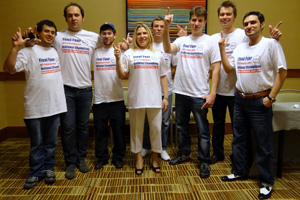 This is the second straight national championship for the Knight Raiders and their third straight trip to the Final Four of College Chess.

For the second straight year the Knight Raiders won the President’s Cup, a premier event that is known as the Final Four of College Chess and determines the country’s top intercollegiate team.

The three-day event in Washington, D.C. began Friday and concluded Sunday with the Knight Raiders repeating as national champions with eight points. The University of Texas at Dallas and University of Maryland Baltimore County finished second with 7.5 points each, and New York University finished fourth.

Susan Polgar, Knight Raiders head coach and director of the Susan Polgar Institute for Chess Excellence (SPICE), is the first woman in history to lead a men’s Division I team to two straight national championships.

“It was total teamwork. Nothing was decided until the final second,” Polgar said. “We are very proud and happy to bring another Final Four Championship to Texas Tech.”

The SPICE program is a unit of the Division of Institutional Diversity, Equity and Community Engagement.