The banquet is an opportunity to acknowledge the successes of the Greek community. 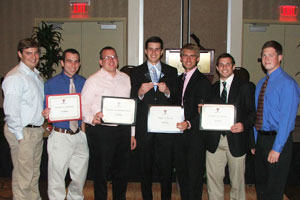 Sororities and fraternities had an opportunity to apply for specific awards highlighting their successes. Farmhouse received the award for IFC chapter of the year.

The awards banquet is an opportunity to acknowledge the successes as members of the Greek community, as individual sororities, fraternities and as Greek alumni.

“Typically fraternity and sorority officers as well as award nominees attend this banquet,” said Megan Robare, Panhellenic advisor for the campus. “Sororities and fraternities had an opportunity to apply for specific awards highlighting a variety of success for individuals in their organization or for the organization as a whole.”

Applications submitted by sororities and fraternities were judged by the Awards Selection Committee made up of representatives across the Texas Tech campus.