Suzanne Taylor, whose term begins June 1, is the seventh student to serve on the Board of Regents. 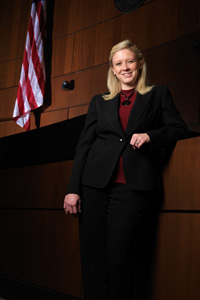 Taylor, who is pursuing a law degree from the Texas Tech University School of Law, received her bachelor’s degree in advertising from Texas Tech in 2010.

Taylor, who is pursuing a law degree from the Texas Tech University School of Law, becomes the seventh student to serve on the Board of Regents. Her one-year term begins June 1.

“Suzanne is a leader and has a great history of serving Texas Tech,” Chancellor Kent Hance said. “It was a pleasure getting to know Suzanne when she served as the president of the Student Government Association, and I know she will do an excellent job representing the students from all three component institutions.”

Taylor, a native of Arlington, is a second-year law student expected to graduate in May 2013. Aside from her studies, Taylor has taken part in the law school's advocacy programs as well as secured internships and employment in the public sector.

She has worked as a briefing intern in the appellate division for the Lubbock County criminal district attorney since May 2011 and as a graduate assistant in the external relations and strategic initiatives area for the Office of the President at Texas Tech.

“This is a tremendous appointment, not just for Suzanne, but also for Texas Tech," said Guy Bailey, Texas Tech president. "Suzanne is a third-generation Red Raider and a great ambassador for the university. She has led her moot court team to national competition and is the first Texas Tech student to receive an internship with the Association of Public and Land-Grant Universities. We are proud to have her continue serving the university in this capacity."

Taylor received her bachelor’s degree in advertising from Texas Tech in 2010 where she was heavily involved on campus.  While attending Texas Tech, she served as the president of the Student Government Association and Sigma Phi Lambda, a women’s Christian sorority. Taylor is currently still involved with Sigma Phi Lambda, serving as an alumni council member.

Taylor is married to Brandon Taylor, a customer relationship manager for undergraduate admissions at Texas Tech, and they both reside in Lubbock.

Student Honored as Youth Volunteer of the Year

GEAR Provides Students with a Glimpse of Their Future