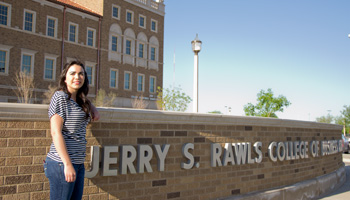 Carlos chose the Texas Tech Rawls College of Business because of its academic reputation and proximity to her hometown.

For one Texas Tech international student, a for-credit internship turned into a full-time job in NYC.

“It’s fairly typical for students from Mexico to attend English school in the U.S. after graduating high school,” she said. “What isn’t typical is deciding to stay.”

After completing her one-year English program in Utah and trying a couple courses at Brigham Young University, Carlos knew she was meant for the business world. Hoping to attend a well-known business school closer to her family, she transferred to Texas Tech in 2009.

Although she was set on business, Carlos explored many concentrations in the field before finally deciding on finance. After taking her first finance class, she quickly fell in love with the subject.

“Finance gives you a lot more freedom to think outside the box,” Carlos said.

For an individual who doesn’t spend much time living in between the lines, this was perfect. After moving from Mexico to Utah and Utah to Texas, Carlos recalls several culture changes among her three residences.

Like any student coming from a small city, Carlos saw Lubbock as much larger than her hometown.

“My family lives in Jimenez, Chihuahua,” Carlos said. “The population is around 40,000, and the principal economic activities are agriculture and farming. The only establishments that are not local are a couple supermarkets, and most of the entertainment is outdoor activities.”

But it was more than the change in population that provided a challenge. Carlos went from a primary language of Spanish to everyday English and from attending soccer, or “futbol” games in Mexico with many families to large American football games with peers. She went from family-style living with other international students in Utah to roommates in Lubbock she’d never met. 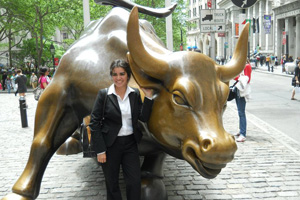 Carlos not only thrived during her Wall Street internship last summer, she called it the best experience of her life.

“It was interesting because everyone was nice, but they would also sit and stare at me and ask me questions about Mexico,” Carlos said.  “You have to get used to how things work and how being roommates work. I did, and one of those girls is still a good friend of mine.”

“My internship in New York was the best experience of my life,” she said. “I loved it and I’m going back. It was shocking, but I was expecting a different life. It was very hectic, everyone runs all day. You wake up really early, get your coffee, go to work, work all day, work, work, work, and then I’d leave the office at 11 p.m. every day.”

Surrounded by students from Ivy League schools, Carlos found the courses she has completed at Texas Tech were useful tools.

“I am very close to a lot of my professors,” Carlos said. “It’s a really good program. And last semester I took this class, student managed investment. It’s a class that’s mixed graduate and undergraduate, and you basically manage the school endowment fund. At the end of that class, the professor gives scholarships to take the Charter Financial Analyst (CFA) test.  The test is hard and has a low passing rate, but it is very similar to what we learned in class.”

Debbie Laverie, senior associate dean of the business college, said Carlos is one of the most outstanding students she has ever worked with. 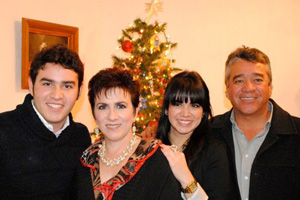 Carlos misses her family, especially her mom's cooking, but she also feels at home at Texas Tech.

“This is after 17 years of teaching at Texas Tech and several thousands of student  interactions,” Laverie said. “Lili is bright, motivated, a hard worker and pleasant to work with. Her performance on Wall Street during an internship this summer really made the Rawls College and Texas Tech look good. Lili outperformed investment analysts from Ivy league schools.”

Carlos encourages other international students that one of the keys to her success was getting involved in organizations and meeting people.

“When I first joined the business fraternity, Delta Sigma Pi, it wasn’t what I was used to, like the formalities of a fraternity. We aren’t used to that in Mexico. But I found academic organizations can really help you, even if it’s just making your English better, talking to Americans and talking to people whose native language is English. It helps a lot.”

“Lili was a student in my financial statement analysis course, and she did an excellent job,” Winters said. “English is not her native language, and I was impressed that she would have a conversation before class each day in Spanish and then turn around and do a great job in my class.”

While Carlos misses her family and her mom’s cooking, she is thankful for the technology that allows them to be in contact nearly every day. Following her internship, Carlos was offered a two-year contract with the company she interned with and will return to New York after she graduates in May.