GEAR Provides Students with a Glimpse of Their Future

Student mentors prepare for engineering careers while inspiring schoolchildren to do the same.

The year's theme was “Power Up,” with the goal of inspiring future generations to consider a career in engineering, science or technology.

More than 500 robots motored onto the Texas Tech campus Saturday. Though no time-travelers were included in this go-round, the machines did come from great minds of the future. These robots were conceived in the vast imagination of children assisted by student mentors.

Get Excited About Robotics (GEAR), a nonprofit volunteer organization, invites elementary and middle school students to compete in an eight-week challenge that involves programming LEGO robots to do a series of tasks.

“Their goal is to inspire future generations to consider a career in engineering, science or technology,” said Tanja Karp, associate professor of electrical and computer engineering.

Karp has organized the competition since 2006, when it was merely a trial run held at Harwell Elementary School. It has grown since then. For the past five years, Texas Tech has served as a local GEAR hub for the competition in Lubbock.

The theme this year was “Power Up,” in response to corporate sponsors, Halliburton and Alpha Industries. More than 500 students from 50 schools around the Lubbock area and across the South Plains participated.

One of the student mentors who assisted was Megan Nicole Conway, a junior mechanical engineering major from Plano. Conway said she is happy to share her love of science with children who may one day follow her into the engineering field.

“I got involved through a service learning course and mentor for an hour a week at the schools,” she said. “It’s fun to see them get excited when a robot does what they want it to on this eight-foot-by-eight-foot field.”

“The kids used their robots for tasks such as relocating oil drilling rigs, repairing underwater pipelines or delivering solar panels,” Conway said. “Each task depending on its difficulty is worth a different number of points. And they can choose to do as many as they want in two minutes.”

In addition to the scored competition, Conway said awards are given to students in other categories, including the most creative robot, most creative use of tools, and best themed. 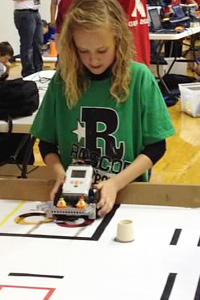 The students used their robots for tasks such as relocating oil drilling rigs, repairing underwater pipelines or delivering solar panels.