Former US Poet Laureate Gracing the Stage at Texas Tech

Billy Collins will speak in the Presidential Lecture and Performance Series April 20 in the Allen Theatre. 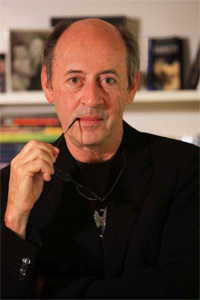 Collins created Poetry 180, an initiative aimed to encourage high school students to read poetry for 180 days of the school year.

Whether a child likes it or not, parents’ characteristics and quirks are often passed down to them. Thankfully for America, former U.S. Poet Laureate Billy Collins’ mother passed down the right ones to him.

“Without meaning to, my mother prepared me for poetry by having hundreds of lines of it in her head, lines she uttered at the slightest provocation,” Collins said. “Adolescence draws us to poetry as a way of dealing with our estrangement, our new sense of distance from play, and I was no exception. I loved metaphors. I would put a little flag next to every good one I found in my reading.”

Collins is the next lecturer in the Texas Tech Presidential Lecture and Performance Series and will take the stage at 7 p.m. April 20 in the Allen Theatre.

The U.S. Poet Laureate is appointed by the Library of Congress and responsible not only for overseeing series of poetry readings and lectures, but also promoting poetry throughout the country.

Traditionally, poet laureates are not required to compose poems for government events, but during his time as poet laureate, Collins was asked to write a poem commemorating the victims of the Sept. 11, 2001 terrorist attacks. The poem was read in front of a special joint session of congress.

Collins also has published nine collections of poetry. Some of his most famous works include “Questions About Angels,” “The Art of Drowning” and “Picnic.”

“His work is unique in that he has gained a national audience of readers far beyond what most of the rest of the poets would hope to acquire,” said John Poch, a professor of creative writing at Texas Tech. “He has a no-nonsense delivery that doesn’t overemphasize his rhythms while allowing the reader to get a strong sense of a poet who works in very smart cadences.”

Poch said a lot of people try and paint Collins into a corner by saying he is simple, but that couldn’t be further from the truth. Poch said Collins knows what he is doing and called some of his work “utterly profound.”

“People often laugh, cry perhaps, and smile a whole lot when a poet reads poems. They won’t be doing this because of mere entertainment but because they are experiencing poetry,” Poch said. “This is a different kind of laughing, crying and smiling than a person does at any other time in life.”