Jordaine Holden and Erik Gonzalez transferred their duties at the Passing of the Guns ceremony. 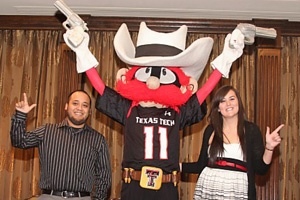 Erik Gonzalez and Jordaine Holden were honored for their service as Raider Red during the Passing of the Guns ceremony.

After serving in secret as Raider Red, students Jordaine Holden and Erik Gonzalez finally revealed their true identities as Texas Tech honored them for their service.

The former mascots transferred their duties to new students Friday during the seventh annual Passing of the Guns Ceremony.

With his red mustache and floppy white hat, the swaggering Raider Red is a symbol of Texas Tech spirit and pride. He was designed in the early 1970s by Saddle Tramp Jim Gaspard based on the illustrations of Dirk West.

Holden, a sophomore early childhood education major from Oklahoma City, served as Raider Red for one year, appearing as Red about 50 times. As is required, she is a member of the High Riders, and serves as head of the press and public relations committee for the organization.

“My favorite memory of being Raider Red was my very first appearance where I got to blow an air horn to start a race for charity,” Holden said.

Gonzalez, a theatre arts major and education minor from Brownsville, served as Raider Red for the past two years and said it has been the best experience of his college career.

“I’ve been fortunate enough to have the opportunity to meet so many people along the way and travel to so many different cities around the state and country,” Gonzalez said. “One of my more notable experiences would have to be last year when I traveled with the women’s basketball team to the Big 12 and NCAA tournaments. It was fun to watch and cheer on the team as they competed for a championship. Also, as a big football fan, I was glad to be in Norman this year when we upset Oklahoma at its homecoming game and ruined its national title hopes.”

Gonzalez appeared as Raider Red more than 100 times in the two years he spent as the mascot.