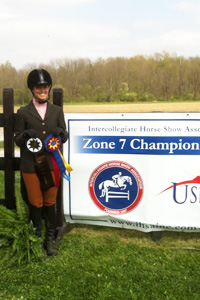 Haley Aydam was crowned Champion Open Equitation Over Fences and is the first English rider to ever advance to nationals from Texas Tech.

For the first time in school history, Texas Tech’s Department of Animal and Food Sciences will be sending two students to compete May 3-6 at the National Intercollegiate Horse Show Association’s (IHSA) national championship in Raleigh, N.C.

At the zone competition recently held in Indiana, Haley Aydam of Austin was crowned Champion Open Equitation Over Fences and qualified to compete at the national event. Her teammate, Tobie Montelbano of Gilmer also qualified.  He was the Reserve Champion Reiner and will be representing Texas Tech in the Reining Division at the national contest.

“We are very excited and proud of these students,” said Jane Bagley, a visiting associate professor in equine science with Texas Tech’s Department of Animal and Food Sciences. “This is an awesome accomplishment and truly shows how dedicated they are.”

Aydam is the first English rider to ever advance to nationals from Texas Tech and has been riding since she was six years old. She has enjoyed competing on the team for the past two years.

“It keeps me doing what I enjoy,” she said. “It’s also challenging because you get on a horse you’ve never ridden before.”

In IHSA competition, the rider draws for their mount before each class and is not allowed to practice or warm up on the given mount.

It takes a true horseman to communicate and ride without having any prior relationship with the horse, explained Bagley.

The Texas Tech Equestrian Team is open to any undergraduate student, regardless of major or classification, who wants to ride and compete. Tryouts for the team are held each year. The team competes in Zone 7, Region 1 of IHSA. The team is coached by Danica Jorgensen and Lindsey Overman.