While at Texas Tech Duane Hill was a member of the band and served as drum major. 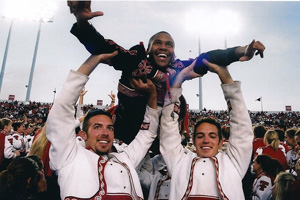 Hill, center, served as drum major of the Goin' Band From Raiderland and received his bachelor's and master's degrees from Texas Tech.

Duane Hill, the new Texas Tech associate director of bands and director of athletic bands, is the exception.

“I will never forget the moment I was on the field as a freshman and I was looking at Mr. Bearden, who was the director at that time, and I thought, ‘That is exactly what I want to do,’” Hill said.

Since then, he has tried to put himself in a position to reach that goal. Now, at age 30, he has.

“Texas Tech has been the world for me,” Hill said. “It’s kind of funny, our motto, ‘From here it’s possible,’ is so true for me because I’m someone from a small town who made their way up to Lubbock, adapted quickly, got involved and worked hard. Now I’m at the point I am so early in my career, and its truly a great feeling.”

During his time as a member of the Goin’ Band from Raiderland, Hill was a drum major, and after graduating, worked for four years at Leander High School. He came back to Texas Tech where he earned his master’s of music in conducting. After graduating Hill stayed at Texas Tech and was the interim Goin’ Band director, then was promoted to the assistant director in 2011.

Hill said he was very fortunate because during the past couple of years, though they’ve been on an interim basis, he implemented some of the things he believes in. 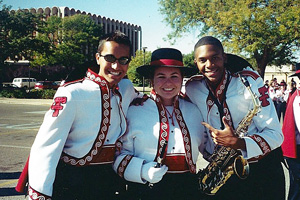 Hill, right, joined the Goin' Band as a freshman saxophonist.

“One thing I value is student leaders being heavily involved in what we do, from teaching to motivating to inspiring students to be excellent,” Hill said. “Also, we want to get the students’ input on what we do.”

He said the Goin’ Band is in the process of having the students vote on the show the band is going to perform for homecoming. He said during the football games this year he is going to take the voting process even further and have fans vote via text message for the show they will perform in 2013.

“It’s ways like this I want to get the community involved,” Hill said. “That’s one of the main things I want to do. We have already started community outreach by performing at local high schools and participating in such events as the Lubbock ISD Band Extravaganza.”

He said he is just looking for any way to get the Goin’ Band’s name out there not just because the band has such a rich tradition, but because he wants to represent the university in the best way possible.

“So my goal is to continue with community outreach, continue to focus on students leading students and, most importantly, I want us to be the best possible example we can be both in character and academia – and most importantly for me, music,” Hill said.