Researcher to Lecture on Roman Cartography 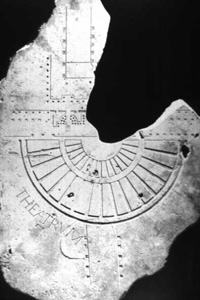 In his lecture Talbert will discuss the impact made by the Peutinger map and its influence on Christian mapmaking.

Texas Tech and the American Institute of Archeologists Lubbock Society will host Richard Talbert, a researcher in ancient cartography, who will present a lecture concerning Roman cartography and the Peutinger Map, a significant document because it is the only known surviving map showing the “cursus publicus,” or roman roads.

The event will take place at 5:35 p.m., Wednesday (March 7), in Room 0001 in the English and Philosophy Building and is free and open to the public.

Classical scholars have become more attuned to the importance of cartographic representations and the Roman worldview, and Talbert has applied this new way of thinking to the Peutinger Map and A.D. 210 Serveran Marble Plan of Rome. In his lecture Talbert will discuss how the Peutinger map was a pivotal moment in Western cartography and will further explore its long-term impact and influence on Christian mapmaking throughout the Renaissance.

The version of the Peutinger Map researchers have today is a 13th century medieval copy of an original that was last revised around A.D. 400 For the Romans, such a map was much more than simply a factual record; it was a valuable document promoting and reinforcing values such as pride, conquest and entitlement to world-rule that were integral to maintaining public support.

Talbert has held a Guggenheim Fellowship, an American Council of Learned Societies Senior Fellowship and the inaugural Goheen Fellowship at the National Humanities Center. He has received a Doctorate of Letters from Cambridge University and has been awarded a Harley Research Fellowship in the History of Cartography for his work in London.