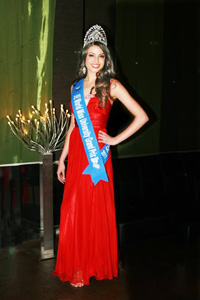 Bojorquez, who hopes to become a criminal prosecutor, said her platform theme for pageants focuses on the environment, preserving nature and similar causes.

The second-semester Texas Tech freshman who won the title of World Miss University describes herself as “nerdy,” a characteristic many people wouldn’t associate with a pageant winner.

“I started doing this two years ago,” said Siria Bojorquez, an honors arts and letters major. “People think I’ve been doing it my entire life. When they find out, they think I’ve been like ‘Toddlers and Tiaras.’ That’s not the case.”

On a regular day, eyeliner is overdoing it for her.

“On stage I have to wear a lot of makeup,” she said.  “I didn’t know how to apply makeup until about a year ago. I had to take makeup lessons, but I realize that it is a beauty pageant. As much as I try and change the image of it, I do have to wear makeup, and my clothes have to be semi-matching.  So I just try to do that, but that’s not what I’m totally focusing on.”

Bojorquez, who hopes to one day become a criminal prosecutor, chose Texas Tech for the tight-knit courses the Honors College offers and the law program.  She even used course material from a critical writing class with Texas Tech Professor Kurt Caswell during her month-long trip to South Korea, where she was crowned Miss World University.

“I ended up using one of the books we were reading in one of my speeches in Korea. So while I was there, I ended up emailing Professor Caswell,” she said.  “It’s cool because he’s just really into the environment and other things I’m really interested in as well.”

Caswell described Bojorquez as an eager and thoughtful student.

“She seems to know already, that prizes take care of themselves if you focus on the work, which is rare for someone at this early stage in her work and life,” Caswell said. “I think this is how and why she won in Korea. She knows grades or prizes are merely the physical or tangible representation of that work.”

According to Caswell, “The Forever War” is about the cost and suffering of people in Iraq, Afghanistan, and the U.S. due to war. It deeply moved Bojorquez, and that is why she referenced it in her speech.

“She wanted very much to serve as an ambassador for peace at the pageant, and I believe she was successful in that endeavor,” Caswell said.

Her platform theme for pageants has always focused on the environment, and Bojorquez said she loves the voice winning gives her for preserving nature and similar causes. Before competing for the title of World Miss Universe, Bojorquez won a number of other titles, including Miss Teen Earth 2010.

Resulting from her title as Miss Teen Earth 2010, she had the chance to travel the country and spread the purpose of Terracycle, a recycling company she supports. One of her favorite opportunities is speaking at elementary schools and sharing the simplicity of recycling.

“When I’m talking to the kids, I usually get them to do something hands on so that they can go home and do it there,” she said. “I’m really into doing things with Capri Sun bags for example. So when they go home, instead of throwing away the Capri Sun bag, they say, ‘Mom, I want to make something!’”

Terracycle, which Bojorquez said is known for their Capri Sun products, takes trash that would normally end up in landfills. They pay nonprofit organizations for the trash they send in and make products out of it.

While in South Korea for World Miss University, Bojorquez talked with many elementary students. As many similarities as there are between the people in the U.S. and South Korea, she noted a few large differences.

“They just have different customs here and there,” she said. “For example, you don’t touch a Korean on their shoulder, that’s not an OK thing to do. So the way they communicate is different, but other than that, they’re completely the same and really hospitable, amazing people.” 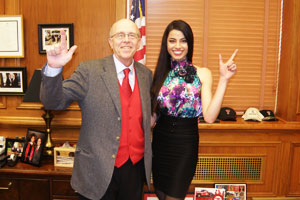 A current member of Pegasus and President’s Select, Bojorquez hopes to implement a Teracycle recycling program at Texas Tech and begin speaking with elementary students in the Lubbock area.

Traveling to South Korea for the pageant was the first time anyone in Bojorquez’s family had been overseas. Her background had not catered to it. After losing her mother at age 11, Bojorquez was raised by her grandmother on a side of El Paso for which she loves, but says is not known as the most spectacular part of town.

“It is always hard to be in a situation like when I came to orientation,” she said.

“I was completely by myself. I am a first-generation college student. I drove up here the six hours from El Paso by myself. And at orientation, I’m sitting there, and everyone is with their moms and dads.  I called my aunt, and was like ‘I can’t do this. It’s not that I can’t be at Tech, it’s that everybody is with their parents and I miss my mom.’’

Her childhood situation is part of who she is, and she wants to ensure every child knows their worth despite their circumstances.

“Even if you think you’re different, you’re normal and it’s fine,” Bojorquez said. “No one who ever deemed themselves to be normal ever went on to be something great, so just go out there, do something, change the world. Don’t let anything hold you back.”

Bojorquez loves that she can now be a role model for children in hard situations, and attributes part of her personal success at the World Miss University pageant to the nurturing and encouraging environment at Texas Tech.

“All my professors were really, really supportive,” she said. “They helped me out. I was gone for a month. I took four finals in Korea, so none of this would have been possible if my professors hadn’t let me. If the Honors College counselor hadn’t approved of it, if everyone hadn’t been backing me up it wouldn’t have been possible.”

A current member of Pegasus and President’s Select, she hopes to implement a Teracycle program at Texas Tech and to speak with elementary students in the Lubbock area, which she now calls home. The students, faculty and staff surrounding her have made it that.

Tyler Enos, president of President’s Select, said Bojorquez is someone who can take command of a room and a conversation.

“Her confidence is contagious,” Enos said. “As a member of President’s Select, she provides a unique perspective to prospective students and families, all while representing the organization and Texas Tech in the highest fashion.”

Bojorquez recalls a moment in South Korea when she was taking a final for school at 3 a.m., hadn’t slept and needed to be up and preparing for the day in three hours. Texas Tech, despite the distance, lifted her spirits.

“Just getting online and seeing people from Tech, some people that I didn’t even know, I mean I’d just moved here a few months ago and already people were supporting me, saying ‘Alright, yes, go! Represent Tech! Go Texas Tech.’ It was just great.’”