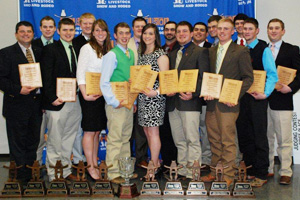 Texas Tech’s meat judging team walked away with first place honors March 4 at the Houston Livestock Show’s Intercollegiate Meat Judging Contest. This is the eighth-consecutive year the Red Raiders have won the competition in Houston.

The Red Raider’s Black team finished first and posted a total score of 4,053 points. They outdistanced their nearest competitor, Kansas State University, by 23 points. Oklahoma State University and Texas A&M University were third and fourth in the competition. The Texas Tech red team was fifth overall.

“I’m very proud of the commitment of these students this spring,” said Mark Miller, Horn Professor and San Antonio Livestock Show Distinguished Chair in Meat Science. “We are very blessed to have such a deep team this year.”

The team is coached by graduate students Collin Corbin and Henry Ruiz along with Miller.

This was the last contest of the spring for the 2012 team. Next fall they will compete at four more contests. The team also will host six contests and workouts this spring and summer at Texas Tech for 4-H and FFA students from across the United States.

During the past decade, Texas Tech has established a dominant record in meat judging. They have won more than 60 percent of all national contests and four national championships.