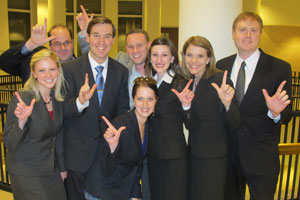 Third-year students Brandon Beck of Austin, Allie Hallmark of Midland, and Elizabeth Hill of Lubbock, fresh off their win at the National Moot Court Competition last month, defeated teams from DePaul University College of Law, University of Miami School of Law, Valparaiso University Law School, and ultimately Southern Methodist University Dedman School of Law in the final round. Beck’s brief was named the competition’s best, his fourth Best Brief award in his law school career, and Hill was named the third-best advocate.

The teams are coached by Rob Sherwin, director of Texas Tech Law’s Advocacy Programs, and Natalie Roetzel, chief counsel for the Innocence Project of Texas.

The second team of third-year Ben Robertson of Houston, and second-year students Reagan Marble of Jourdanton and Suzanne Taylor of Arlington claimed a championship of their own, beating teams from St. Thomas University School of Law-Fla., Ohio State University College of Law, University of San Francisco School of Law, and SMU’s other team in their final round.  Marble and Taylor tied for the fourth-best advocate award.

Texas Tech Law is one of just two schools in the nation to claim dual regional championships in this year’s competition.

“It has been the fourth-straight year we have accomplished that,” Sherwin said, “And in that time, we have produced more regional champions than any other school in the country. From a field that started with more than 200 teams, to have two in the top 26 is a tremendous feat.”

Both teams now advance to Chicago for the national finals in April.

The ABA Law Student Division National Appellate Advocacy Competition emphasizes the development of oral advocacy skills through a realistic appellate advocacy experience.  Competitors participate in a hypothetical appeal to the United States Supreme Court. The competition involves writing a brief as either respondent or petitioner and then arguing the case in front of the mock court.