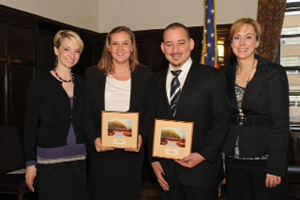 Pictured L to R: Pratt, Brewer, Bonilla and Sherwin. Bonilla and Brewer earned the overall best brief award among 77 teams from schools across the United States.

Ricardo Bonilla, a third-year student; and Cara Brewer, a second-year student, earned the award among 77 teams from schools across the United States that competed in the contest, which was hosted Feb. 23-25 by Pace Law School in White Plains, N.Y.

“Our advancement in this competition demonstrates that Tech Law not only has one of the top advocacy programs in the country, but also a major presence in environmental and energy law,” Sherwin said.

Since 1989, student advocates from across the United States and Canada have participated in the National Environmental Law Moot Court Competition. Recognized as the preeminent environmental law moot court competition in the United States, it tests skills in appellate brief writing and oral advocacy on issues drawn from real cases, providing experience in environmental litigation first hand. The competition is distinctive in that three adverse teams argue the issues, reflecting the fact that environmental litigation frequently involves multiple parties - the government, a public interest group and a member of the regulated industry.