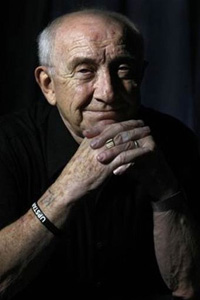 Holocaust survivor Max Glauben will speak about his story of courage and determination.

Glauben, an eminent holocaust survivor and educator, and prolific public speaker will speak at the Escondido Theater at 10:30 a.m. Saturday (March 24). This event is open to the public and free of charge.

Currently a resident of Dallas, Glauben was born the son of Jewish middle class parents in 1928 in Warsaw, Poland. By the end of 1939, his entire family had been relocated to the Warsaw Ghetto, where he stayed until the 1943 Warsaw Ghetto uprising. He and his family were transported via boxcar to the Majdanek gas chambers, where most of his family members were executed. He and his father were selected for slave labor in the Budzyn Concentration Camp.  After his father was killed, Glauben was sent to the Mielec, Wieliczka, and Flossenburg concentration camps.

Glauben was liberated by the United States Army on April 23, 1945.

He moved to New York in December 1947, and later moved to Atlanta. Glauben was drafted into the US Army during the Korean War in 1951, where he served at Fort Hood. In 1953, he was discharged from the Army, married Frieda Gappelberg, a Dallas native, and has remained in Texas ever since.

Glauben speaks to civic organizations, student groups and other audiences on a regular basis about his experiences.