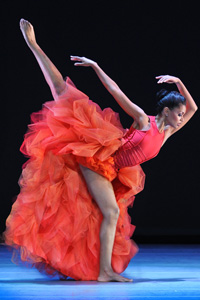 The company was founded in 1974 with a mission to establish an extended cultural community that provides dance performances for all people.

The Texas Tech Presidential Lecture and Performance Series kicks off its Spring 2012 season with the New York-based Ailey® II at 7 p.m. Friday (Feb. 17) in the Allen Theatre, located in the Student Union Building (SUB).

Ailey® II has become a renowned dance company, winning rave reviews and regularly selling out its North American tour stops and annual New York seasons. South Plains dance artists and enthusiasts are invited to witness this critically acclaimed company as it includes Lubbock on a 32-city domestic and international tour.

Today, it has become one of the most popular dance companies in the United States. Under the artistic direction of Sylvia Waters and joined by artistic director designate Troy Powell, Ailey® II dancers are chosen from the most promising scholarship students of The Ailey School which offers unique opportunities for these young artists.

The Ailey® II performance will include, Alvin Ailey American Dance Theater Artistic Director Robert Battle’s, “The Hunt.” Set to the wildly percussive soundtrack by “Le Tambours du Bronx,” the ballet of six men examines the relationship between modern sports and the rituals of the gladiators, revealing the aggressive side of human nature and the primitive thrill of the hunt. The performance also includes Thang Dao’s “Echoes,”Jessica Lang’s “Splendid Isolation II, The Calling” and Alvin Ailey’s timeless masterpiece “Revelations.”

“Ailey® II is truly an event not to be missed.  It is rare in Lubbock that we are audience to dance companies who perform works counted among the canon of American masterpieces,” said Genevieve Durham Decarso, an associate professor in the Theatre and Dance Department at Texas Tech.

General Admission tickets are $15 and are available through all Select-A-Seat locations, (806) 770-2000 or www.selectaseatlubbock.com. TTU students receive one free ticket with valid ID at the SUB information booth located at the entrance to the Allen Theatre.