With the impending troop drawdown, the Military and Veterans Program assists veterans with college career. 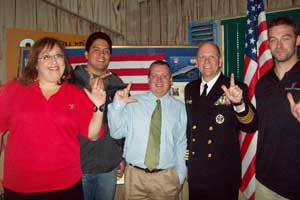 The MVP staff makes sure student veterans and their families achieve academic and personal success at the university.

With the impending troop drawdown from the Afghanistan and Iraq wars, some military veterans are left contemplating their next moves in life. Should a veteran choose the college route, Texas Tech and its Military and Veterans Program (MVP) can assist in the often hectic college-entry process.

Texas Tech’s MVP program, part of the Division of Institutional Diversity, Equity and Community Engagement, was created only 18 months ago but already has become a staple at the university.

“We are here to make sure student veterans and their families achieve academic and personal success here,” said Ryan Van Dusen, the assistant director of the MVP program. “It really gives veterans a primary point of contact on campus. We make sure to get them the right resources, and basically are advocates for them on campus and help them to get pointed in the right direction.”

The program also helps assist veterans off campus by keeping them informed about several agencies around town that offer services to veterans free of charge or at a minimal cost.

Texas Tech currently has around 300 faculty and staff who are military veterans.

“On top of that, almost everyone you talk to on campus has some sort of connection to the military,” Van Dusen said. “There is an appreciation for service here. I always ask veterans why they came to Texas Tech, and they always say ‘Because people care about my service, and you can tell they care.’”

Van Dusen said the MVP program is comprised of three professional staff members: himself, a military veteran, and two others, Debra Crosby and Bernice Flett, who have worked in veteran services for most of their careers. There also are seven student assistants, all military veterans, who are very knowledgeable because they are on the same path as the students who are coming in for assistance.

This type of program is not available at every college and Van Dusen said more colleges don’t have them than do have them.

The MVP program serves around 1,300 military veterans or veteran dependents, and Van Dusen said even more could be on campus who are not self-identifying, may be in graduate school or law school, or have already used their benefits. A recent trend he has seen take place is many students not knowing they are eligible for benefits.

“We are seeing some of our biggest growth with the Hazlewood Act, which is a state bill that waives up to 150 hours of tuition and fees, and Texas veterans can transfer those benefits to their qualifying dependents,” Van Dusen said. “We are having so many veterans’ children who are coming to Tech that don’t know that they have this benefit. They first find out about it when they come to orientation.”

Monty Trimble, a senior electrical engineering major from Pampa, and president of the Veteran’s Association, said the staff at the MVP office are not only trained to process forms from the university but also from the Veterans Administration that oversees veteran educational programs.

Trimble, who retired from the Navy as a Chief Petty Officer in 1995, said by having one place to take care of issues that arise in the education process, veterans aren’t spending a lot of time going between several different offices. That helps greatly reduce the stress of entering college, he said.

Van Dusen said Texas is a great state for veterans to attend college because laws allow out-of-state veterans to possibly still be eligible for in-state tuition. The state is also very patriotic, and patriotism shown by citizens carries over to the university campus, he added.

“I have been to other campuses and seen where veterans get pushed in a back room or in a hallway somewhere to get their information processed,” Van Dusen said. “Here people truly care about their success, and I see that over and over again. They made the decision to come here because they were so welcome.”

For more information on the MVP program click here.

Students, Do You Know Your Rights?