The 1989 graduate launched the publishing arm of a major media company. 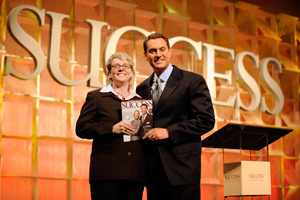 Heisz, pictured with SUCCESS magazine publisher Darren Hardy, said her experience at Texas Tech taught her to be self-sufficient and self-directed, enabling her to learn the skills it would take to develop herself.

To others, she said her resume’ might look like a bizarre collection of unrelated jobs in a multitude of industries.

But Deborah Heisz, a 1989 graduate in English from Texas Tech and recent editor-in-chief of SUCCESS magazine, explained that what all those jobs have in common is the opportunity to develop and create things and build something new. Heisz, 45, simply loves the process of creation and seeing something appear that didn’t exist before.

As senior vice president of creative services at VideoPlus, a 25-year-old marketing communications company that also has publishing and manufacturing arms, Heisz said even now, her title means nothing relative to what she does.

Coming from Hillcrest High School in Dallas, Heisz, wanted to go to a bigger school and have the whole campus-life experience.

“I centered pretty early on the thought of attending one of the larger state schools – UT, A&M or Texas Tech. I always believed that you could attain an excellent and equivalent education at any of them. UT was really not my style as I didn’t want the urban atmosphere education,” Heisz said. “Texas Tech appealed to me in that my family did a lot of hunting in West Texas and I would be able to join them for some weekend outings.”

She visited the campus (it was the only campus visit she made) and for the most part, selected it based on her experience during that visit. She found the campus and the town very welcoming and liked the atmosphere of having the university being the real center of the city.

Heisz said what her experience at Texas Tech taught her most is to be self-sufficient and self-directed.  “I was a poor student my first two years. My last two years, however, I realized it was up to me. I changed majors frequently and was exposed to a lot of different opportunities. However, I learned that the only way to get an education is to commit yourself to it. This is something I have carried into my career. Texas Tech provided an environment which allowed me some latitude but enabled me to learn the skills it would take to develop myself.”

Mike Schoenecke, an associate professor of literature and academic advisor her last two years, stands out as someone who encouraged her creativity and independence.

“I believe it was the first time I really had a professor treat me like an adult and an equal,” Heisz said. “A friend of mine and I were his TAs for a ‘monster’ English Lit class as well as students in his film studies class.”

Heisz worked in the game room at the University Center – now the Student Union Building – and was a part of Army ROTC her first three years on campus.

“Although I did not elect to pursue a career in the military, my fondest memories of Tech are the time I spent with my fellow cadets,” she said. “I was Captain of the Patton Rifles Drill team my junior year and had the honor of presenting the colors on the field before football games, firing the howitzer and even raising the flag at a flag ceremony following the Challenger disaster.” 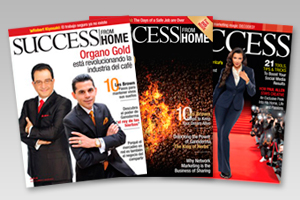 After Texas Tech, Heisz went to Oklahoma State University for a while, thinking she wanted to be an English professor. She said her professors in that department made a big impression on her.  She discovered after only a year, however, that academic life wasn’t for her. Instead she started working, first as a technical writer, then as a project manager. She earned an MBA in marketing from the University of Dallas.

“I always took the job that was most interesting to me and provided the most challenge.”

Heisz, who resides in the Lewisville, Texas area, joined the Dallas-based VideoPlus, LP in August 2004 to launch its publishing business. She is credited with building the publishing division and overseeing the editorial and creative development of all its titles, including "Success from Home, Empowering Women and Your Business at Home".

Prior to her employment, VideoPlus didn’t do publishing. During the past seven years, she has been responsible for building the publishing business and developing several successful products.

“I initially came on board to develop an industry-controlled circulation magazine called Direct Selling News, which we launched in 2004. It is still published, but has been spun off into its own division.”

In 2005 Heisz was responsible for developing a national newsstand publication called Success from Home,which is published monthly and available on newsstands nationwide.

She still manages this part of the business as well as the video/audio production group.

In 2007 Heisz was given a tremendous opportunity when VideoPlus purchased the name rights to SUCCESS magazine.

“I and Darren Hardy, the publisher and face of the magazine, were given the privilege of collaborating to develop an entirely new iteration of SUCCESS that launched in March of 2008. The publication is focused on giving its readers the tools required to achieve their own ideal of success,” Heisz said.

“It has content on business, relationships, health, money and giving back. As editor-in-chief of the first 36 issues of this new publication, I was able to hire and work with a very creative team that has had the privilege of meeting and interviewing some of the great thought leaders of our times as well as other people who make an impact on us every day. It has been a ton of work and a ton of fun. It is also great to see a vision realized.”

Heisz said since that magazine is doing very well, growing in circulation and revenue in a time where most magazines are struggling and many are failing; and, since what she really loves is the creative development aspect (rather than the maintenance) of product creation, the decision was made to hire a new editor-in-chief for SUCCESS. She made that transition in November.

“While I still manage the design, custom publishing and video/audio creative groups, I could not devote the time and attention to SUCCESS that it requires,” Heisz said. “I took on the responsibilities for developing some new products – not magazines – for the company. We are working on some things for our clients that are very exciting but I can’t discuss!”

But one can bet, that no matter what Heisz is working on, it will have success written all over it.