The event will be Oct. 17-21, and draw about 900 environmental reporters, experts and government leaders. 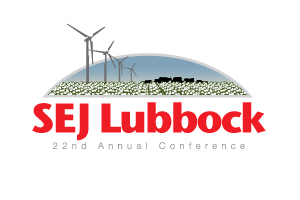 Bringing the conference to Lubbock was the idea of Ron Kendall, director for The Institute of Environmental and Human Health.

Citing scheduling conflicts with the Oklahoma-Texas Tech football game, organizers at the Society of Environmental Journalists have announced a change in dates for the SEJ Lubbock 22nd Annual Conference.

The event now will run Oct. 17-21, and is expected to draw about 900 national and international environmental reporters, experts and industry and government leaders to the Hub City. Texas Tech will serve as host the event.

“With the new football schedule, we needed to make the change to maximize our resources and abilities,” said Beth Parke, executive director of the society. “We’re expecting a lot of interest in the environmental issues faced in West Texas, and we want our society members and others to get the best experience possible.”

SEJ’s annual conference brings together hundreds of journalists, scientists, educators, government officials, environmental advocates, business representatives and other leaders to explore the many facets of environmental stories, Parke said. The goal of the conference is to help journalists working in all forms of media to improve the quality and accuracy of environmental news reporting.

“The fact that Texas Tech is hosting such a prestigious conference is a testament to the kind of university we are becoming,” said President Guy Bailey. “Not only is it a great opportunity for Texas Tech and West Texas to showcase what we do here, but also it will have a positive economic impact on our region as these reporters are learning about us. We are proud to host such a venerable group – especially in light of the current environmental issues Texas Tech is investigating with regard to the oil spill in the Gulf.”

Bringing the conference to Lubbock was the idea of Ron Kendall, director for The Institute of Environmental and Human Health. After reading about a recent SEJ conference held at his alma mater, Virginia Tech, he became intrigued with the possibilities of hosting a meeting at Texas Tech.

“I found out the previous two meetings were at Stanford and The University of Wisconsin at Madison – both of which are top-tier universities,” Kendall said. “Two years ago, we invited the board of directors to come to Texas Tech to talk with us and see the facilities. The board members had excellent interaction with faculty, staff and the community. We are thrilled with the opportunities the 2012 conference will bring for the university and the city of Lubbock.”