College of Education's federally funded initiative has been a winning proposition for everyone. 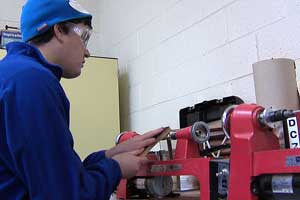 Beyond social skills training there is also job training for students and specific information for the employers about how to accommodate individuals with autism, intellectual disabilities or developmental disabilities in the workplace.

That scenario is changing because of a federally funded project through Texas Tech’s College of Education in partnership with Lubbock and Lubbock-Cooper Independent School Districts and the Texas Workforce Commission.

According to Robin Lock, a professor of special education in the college and director of the project, the Wagner-Peyser grant – federal money given to each state and dispersed through the office of the governor – netted her program $1.5 million over three years.

“The first year (2009), we specifically looked at students with autism and also added in the idea that social skill development for them would make a difference for them in their ability to maintain employment,” Lock said.

In the second year Lock said they decided to add intellectual and developmental disabilities because they had so much overlap there.

“So we added specific components – beyond social skills training – job training for those students that year. We also added more specific information for the employers about how to accommodate individuals with autism, with intellectual disabilities and with developmental disabilities in the workplace,” Lock said.

In 2011, the final year of that grant, Lock said they looked at a model of what makes a workplace successful.

The three-year project has included about 150-175 students; and it has been a winning proposition for everyone involved, said Mike May, director at the LISD Vocational Transition Center (VTC).

The VTC allows students to do different types of tasks over the time they visit, from a two-hour period to an entire morning, depending on their high school’s schedule.

“We’re trying to make sure that there are more vocational opportunities available for our students post-high school,” May said. “We are striving for them to have the best job, the best opportunity that they can have. We want everyone to be competitively employed, but it may be that some students are in a sheltered workshop. If we can get them into a sheltered work environment where they are receiving money for their work, that’s positive. To see them competitively employed is our ultimate goal.” 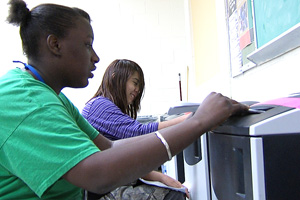 The three-year project has aided 150-175 students from Lubbock and Lubbock-Cooper Independent School Districts.

Lubbock Cooper’s involvement was a little different, in that they had one high school, so the training occurred where the students went to high school.

“Some employers, for example, United Supermarkets, really do a great job employing a good number of individuals with disabilities, and they’ve been very supportive,” Lock said. “There are just a whole bunch of businesses across the city that have been very helpful.”

Lock said different organizations can apply through the governor’s office for the federal flow-through money from the Department of Labor. The opportunity for a project to be funded is dependent on how the governor feels it will impact not only that part of the state, but the state as a whole.

“One of the things the state has been most pleased with is that we’ve been able to come up with a picture, a model of what a workplace looks like that is positive for individuals with autism, intellectual disabilities and developmental disabilities, that people can use and be distributed to other businesses and other types of entities in the state,” Lock said.

What Spring Trends Are on the Fashion Radar?

Looking for new ways to improve the employability of more young people, Lock and her team will be undertaking a new project with recently awarded Workforce development funds. Lock is expanding the program and research to students aging out of the foster care system.

The new grant focuses on a short prevocational assessment and training period with an emphasis on getting the student into the workplace quickly. Lock said it is actually the opposite format from the first grant, which is what makes it different. The new grant also features mentoring from Texas Tech students as well as adults to provide more support to the students as they move into the workplace.

“The Baptist Children and Family Services has just opened the Making a Change (MAC) Center out at Buckner Children’s Home,” Lock said. “Buckner’s, the Children’s Home of Lubbock, and Texas Boys Ranch will all send students there for life skills training and for our vocational training. We are helping them to set up their vocational training for years to come. They also will be working with us to help students find employment and to support them on the job. It’s a great opportunity to partner and set up a highly functional training program.”